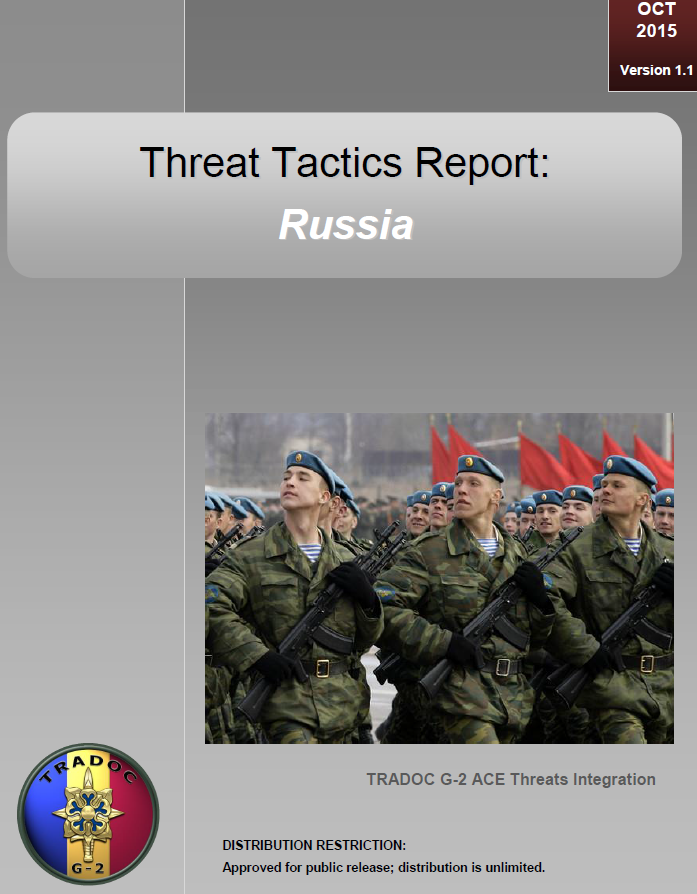 In the last seven years, Russia has reasserted itself as a military force in Eastern Europe and the Caucasus. With the 2008 military incursion into Georgia and the 2014 seizure of Crimea and support for pro-Russian separatists in Ukraine, Russia has assumed a more aggressive, interventionist stance in Europe. In the effort to influence events in Ukraine, the Russians have used what the US Army defines as “Hybrid Warfare” to infiltrate, isolate, and dominate eastern Ukraine and Crimea. This is all a part of the strategy of what can be called “Indirect Action”—the belief by the Russians that they reserve the right to protect ethnic Russians and interests in their former states from domination by Western powers and NATO.

It is important to note that the Russians do not use the terms Hybrid Warfare or Indirect Action to describe these tactics. These are terms that the Western media, think tanks, and analysts have developed to define this method of warfare. The Russians have used terms such as indirect, asymmetrical, and non-linear when discussing what is commonly referred to as Hybrid Warfare. Hybrid Warfare is a part of the strategy/policy of what can be called Indirect Action that the Russians believe is essential to protect their interests in their former satellite states (referred to as “the near abroad”). To the Russians, using covert methods, information warfare (INFOWAR), and special operations troops to make up for conventional disadvantages has been the norm for decades. Because the terms Hybrid Warfare and Indirect Action are familiar, they will be used throughout this report in reference to Russian indirect, asymmetrical, and nonlinear tactics.

This Threat Tactics Report (TTR) will focus on three distinct operations—Georgia in 2008, Crimea in 2014, and eastern Ukraine in 2014–2015. The TTR will present and analyze the tactics used in these conflicts, the lessons learned, and adjustments made by the Russian Armed Forces.

The Russians have employed Hybrid Warfare and Indirect Action to counter NATO and Western influence for over seventy years.Hybrid
Warfare is the use of political, social, criminal, and other non-kinetic means employed to overcome military limitations.1Indirect Action
can be defined as the need for Russia to defend its interests and sphere of influence in its former states and satellites.
Although Western observers characterize the actions of Russian Armed Forces as hybrid warfare, the Russian Army practices its long-established tactics with new attention to advanced developments in many areas such as precision weapons, command and control (C2) and intelligence surveillance and reconnaissance (ISR), and electronic warfare (EW), and including direct and indirect application of these. The nature of these tactics is derived from Russia’s focused assessment of specific neighborhood threats and its long-time focus on security superiority in its Near Abroad.
Russia continues to maintain military bases in its former states to exert influence and control.
The Russians used conventional tactics in Georgia in 2008 and used indirect and asymmetric approaches in Crimea in 2014 and eastern Ukraine in 2014-2015.
The Euromaidan protests and overthrow of the Yanukovych government triggered the Russian incursion into Crimea and the seizure of the naval base at Sebastopol.
Russian intelligence operatives and SPF were instrumental in the success of the Crimea operation and are now assisting pro-Russian separatists in eastern Ukraine.
Russia may use these tactics in other areas such as Moldova, Transniestra, and the Baltic states.
…

Crimea has long sought its independence from Ukraine because of its protracted association with Russia and the people’s desire to rejoin the Russian Federation. Crimea had become the home to a large ethnic Russian population, many of which had served in the Soviet/Russian military. As far back as February 1994, Crimean politicians would make speeches declaring the Crimeans not only sought separation from Ukraine, but also a unification of Crimea with Russia. When Yuriy Meshkov won the first and only independent Crimean presidential election in 1994 with 73% of the votes, he stated, “In spirit, the Crimean people have been and remain part of Russia.” During the next couple of years, Ukrainian marines took possession of a number of naval facilities on Crimea, evicted the pro-Russian political leaders in Crimea, and ended the short-lived independent Crimea on 17 March 1995. With protests from Moscow, this eventually led to the 1997 treaty that divided the Russian naval facilities between the two countries and allowed for the Russians to maintain a military presence in Crimea, primarily to support the Russian navy’s Black Sea Fleet. One of the most overlooked clauses in the agreement which allowed the February/March 2014 events to take place was the section that permitted Russian forces to implement not only security measures at their own permanent bases in Crimea, but to provide security for their own forces during deployment and redeployment movements to and from Russia. In the early stages of the crisis in late February 2014, this very minor clause in the treaty allowed the Russian military to move initially around Crimea without interference by any Ukrainian military personnel under the guise of the movement authorized by the military agreement between the two countries.

The Russian military launched their operation in Crimea less than a week after Ukrainian President Viktor Yanukovych signed an agreement with the opposition political leaders on 21 February 2014 that confirmed early presidential elections would take place by the end of the year, ensured a national unity government would be created within a month, and guaranteed Ukraine would return to its 2004 constitution. Yanukovych then fled Kiev within 24 hours, however, instead of remaining in Ukraine to abide by the agreement. The timing also coincided with the scheduled military maneuvers in the Russian Central and Western Military Districts that obscured the Russian troop movements into the peninsula. The map in Figure 8 indicates the various activities from unclassified sources that took place in Crimea between the night of 27 February 2014 and 25 March 2014, when the Ukrainian government pulled its military forces from Crimea and ceded control of the peninsula to the Crimean “defense forces” backed by Russian military forces.