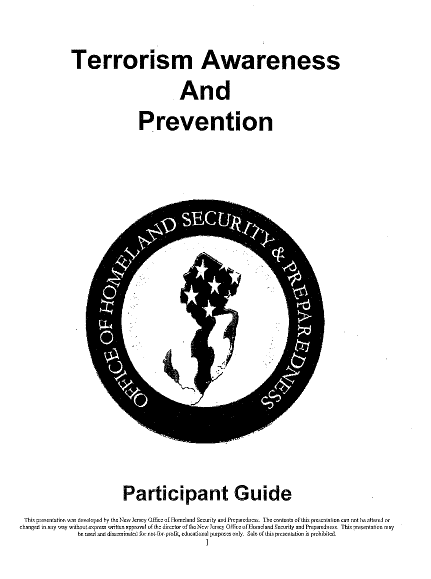 The New Jersey Office of Homeland Security and Preparedness is pleased to present this opportunity for you to learn more about terrorism awareness and prevention. This program is designed to raise the awareness of New Jersey citizens and workers so they can assist in combating terrorism by enhancing powers of observation and encouraging mutual assistance and concern. It involves the joint efforts of the federal, state and local agencies along with the residents of New Jersey.

While our country tells us to be more aware no one is telling is how and for what. This leaves the possibility for misunderstanding, abuses, and prejudices to surface. This program will inform citizens of what to look for and that their observations should rely on the unusual or suspicious activities and behaviors. Citizens should never use race or religion as factors for reporting suspicious activity.

You, the residents and workers of New Jersey, are our partners. 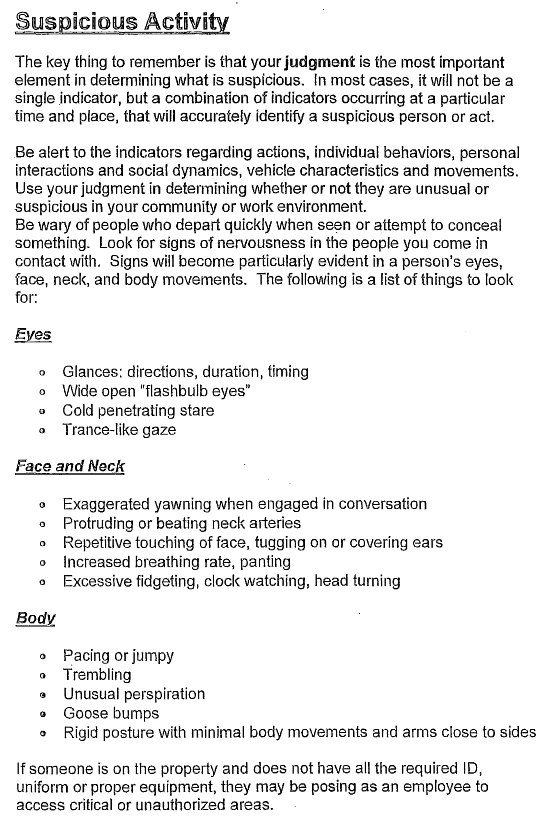 American intelligence agency FBI is reportedly developing new software to scan social networks Twitter and Facebook to look for emerging threats and predict crimes.
The FBI has asked technology firms to create software that can effectively scan the websites for words, phrases and other suspected behaviour, a US Federal site  reported.
It will also be able to translate from foreign languages as well as detect patterns of users misleading the police.
Download the  cake from FBI bakery HERE

Russia recently unveiled its new Kornet EM missile that can launch at least two antitank missiles simultaneously. There is concern that the weapon might be transferred to Syria, and then make its way to Hezbollah in Lebanon

Russia unveiled its new Kornet EM antitank missile at a recent exhibition. This missile is an advanced variant of the veteran Kornet missile, and is meant to be easier to operate against a wider range of targets.

Israel is concerned that quantities of the advanced missile might be transferred from Russia to Syria, and then might end up in the hands of Hezbollah.

The new missile has a greater level of precision with a range of up to 10 km, compared to the previous missile’s range of 5 km.

One of the missile’s advantages is that it can be used in the “natural reserves” in south Lebanon, since it can be assembled on various mobile light platforms.

In addition, the system allows for the simultaneous firing of two missiles, which may pose a risk to the IDF’s armored vehicles.

Israel has been concerned since the start of the popular uprising in Syria that the Assad regime is transferring quantities of weapons to Hezbollah to preserve the strength of its regional ally.

Part 2 of an interview with Shawn Henry, executive assistant director of the Criminal, Cyber, Response, and Services Branch.

Q: Why are partnerships so important?

Henry: The threat we face is not solely within the FBI’s area of responsibility. So we work very closely with other law enforcement agencies and the intelligence community domestically. We share tactics and intelligence. We also partner with the private sector, because they often are the victims and see attacks before anybody else. The final piece—and one of the most significant—is international law enforcement partnerships. The ability to reach across the ocean once we identify criminals and put our hands on them is something that is relatively new. For many years, the adversaries believed they were immune to prosecution because they were thousands of miles away. That’s not the case anymore. Through our partnerships we have arrested hundreds of bad actors who targeted U.S. and foreign infrastructure and institutions. Just in the last two years we have worked with dozens of countries, and we have actually stationed FBI agents overseas into the police agencies in countries including Ukraine, Romania, The Netherlands, and Estonia.

Q: So the cyber threat is truly global in scope?

Q: Going forward, what are the challenges regarding the cyber threat?

Henry: What I call the expansion of the network is going to create challenges. As technology increases, the threat becomes greater. All our wireless networks and smart devices are network-based, and anything touching the network is potentially susceptible. As more and more information transitions across the network, more adversaries will move to get their hands on it, because that information is extraordinarily valuable.

Q: You have responsibilities beyond the cyber area. What are some of the challenges you see with other criminal matters?

Henry: As an organization, fighting terrorism is rightfully the FBI’s number one priority, but criminal threats are substantial. There is white-collar crime, where we’ve seen people lose their entire life savings because of criminals taking advantage of them. There’s something very rewarding about seeing our agents and analysts aggressively working to take those criminals off the streets. We’ve seen public corruption cases where people have abused their position for personal gain. I see those types of cases continuing. There’s a percentage of people in society that are always going to be bad actors.

Q: What are you going to miss when you leave the Bureau?

Henry: The people and the mission. There is nothing else I wanted to do more in my professional life than to be an FBI agent. The quality and caliber of the people I have worked with are second to none. Working day to day to carry out our mission to help protect the country is an experience that can never be replaced. I leave with a tremendous sense of pride.