One part of the relationship between Germany and the US that was never reported before, is the existance of a hotline between the White House and the office of the German chancellor. Described for the first time is also the telephone equipment that was used for this kind of top level communications links.
– Origins – STU-I telephone – IST telephone – Berlin –

The hotline (German: heißer Draht) between Washington and Bonn was established on Marz 16, 1962, after German chancellor Konrad Adenauer had met US president John Kennedy in Washington in November 1961. Apparently it was Kennedy who came up with the idea, maybe inspired by the secure telephone line with the British prime minister that already existed since World War II. The famous hotline between Washington and Moscow was established more than a year later, in August 1963.

In October 1966, the newspaper General Anzeiger reported that besides their initial call, Kennedy and Adenauer never used the hotline, and that at the American embassy, no one was aware of this telephone link.

This had led to the strange situation that on September 27, 1966, chancellor Ludwig Erhard and US president Lyndon Johnson, unaware of the hotline established under Kennedy, also agreed to set up a direct telephone line between the White House and Palais Schaumburg, which was the German chancellor’s office (Kanzleramt) from 1949 till 1976.

After the press had reported about this agreement, Adenauer said that such a hotline already existed: he had used it for four years and had calls with Kennedy quite frequently. Multiple government spokesmen then claimed that the former chancellor was wrong, until an eye-witness was found who finally confirmed what Adenauer had said.

It’s not clear how often Erhard and Johnson used the hotline: one source says they used it several times, another one that it was never used, neither by Johnson and Erhard, nor by Johnson and Kurt Georg Kiesinger, who succeeded Erhard in December 1966.* Under Adenauer and Erhard, the hotline consisted of a normal telephone line without encryption.

In March 1969, US president Nixon offered chancellor Kiesinger to set up a secure teletype link between the White House and Palais Schaumburg. Were they again unaware of the earlier hotline, or was an encrypted link considered more secure? In those days it was much easier to encrypt teletype messages than a telephone channel.

We don’t know whether this secure link was actually established and what equipment was used, but if so, it probably consisted of the same devices used for the hotline between Washington and Moscow: a standard teleprinter made by Teletype Corp. with the encryption being performed by an Electronic Teleprinter Cryptographic Regenerative Repeater Mixer II (ETCRRM II, see photo).

The ETCRRM II used the Vernam stream cipher, in which the plain text message is mixed with a random stream of data of the same length to generate the ciphertext. If used correctly, this method has been proved to be unbreakable.

There are no reports or other sources that mention the hotline between Bonn and Washington after 1969. But a close look at some photos of the chancellor’s office show dedicated American telephone sets that enable a direct and secure communications link with the White House.

The secure teletype hotline was replaced by a secure telephone link, probably by the end of the 1970s, after the German chancellor had moved his office to the newly built Federal Chancellery in 1976. This modern, dark brown office building with lots of glass is located near the Rhine, right next to Palais Schaumburg.

Office of chancellor Helmut Kohl in the Kanzleramt building in Bonn, 1985

On the shelf beneath the painting on the right side of the wall we see two telephone sets: at the left a common gray phone without rotary dial, which was probably part of a dedicated telephone network for government (Bonner Behördennetz?) or military communications. On the right there’s a standard American telephone set with some additional buttons, which can be recognized as the STU-I secure telephone: 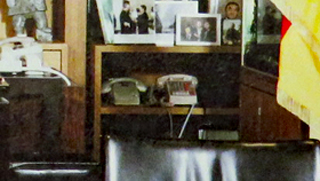 The STU-I was developed by the NSA and introduced in 1977. It was the first secure telephone system that used a central Key Distribution Center (KDC), as well as Linear Predictive Coding (LPC) for better speech quality. Encryption was conducted through the (classified) SAVILLE algorithm, which was developed in the late 1960s by GCHQ in cooperation with NSA for cryptographic devices used by NATO and NATO countries.

It was intended that STU-I would be as compact as possible, but in the end it became a system that consisted of two units: a converted Western Electric telephone set as voice and control terminal, and the actual encryption unit which still had the size of a small refrigerator. Therefore it was often placed in an adjacent room, with a thick gray cable leading to the voice terminal. The price of one STU-I system was 35.000,- US Dollar.

In the US, the STU-I system was replaced by the STU-II and in 1987, NSA introduced the STU-III. This one-piece secure telephone became very successful and widely used throughout the US government and military. For use by NATO forces and governments of friendly nations there was a modified version designated STU-II/B.

It seems that for the hotline with Bonn though, the old STU-I was kept operational, as its voice terminal can still be recognized in this picture of Helmut Kohl’s office in 1991: 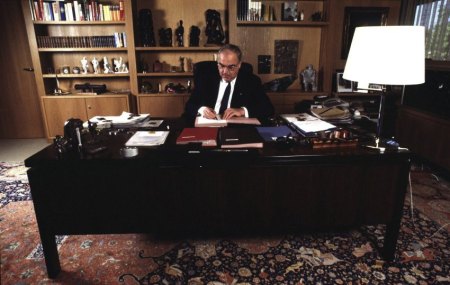 Office of chancellor Helmut Kohl in the Kanzleramt building in Bonn, 1991

Guided tour in the chancellor’s office in the Kanzleramt building in Bonn, 1999

The phone we see here is about half the size of the standard IST: instead of the 40 direct line buttons, there are just 6, replacing some of the special function buttons above the AUTOVON keypad with the four red keys for the Multilevel Precedence and Preemption (MLPP) function: 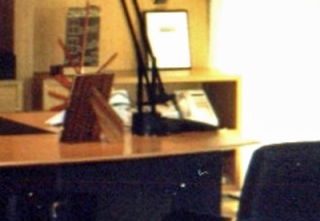 The IST was designed by Electrospace Systems Inc. (ESI) and manufactured by Raytheon as a dedicated device for the Defense Red Switch Network (DRSN) – hence it was called a “red phone”. The DRSN is the main secure telephone network for military command and control communications and connects all mayor US command centers and many other military facilities.

The small version of the IST is rarely seen, but it was in the collection of the JKL Museum of Telephony in Mountain Ranch, California, which unfortunately was completely destroyed by a wildfire two years ago:

It is interesting to see that a secure telephone system that was developed for the internal communications of the United States military was also used for links to foreign government leaders. For this purpose the small IST phone was only seen at the German Chancellery, as well as in the office of British prime minister Tony Blair in 2003 – just like there was also an STU-I in the office of Margaret Thatcher in 1987.

Besides the hotline with Washington, there was a direct facsimile communications link between Bonn and Moscow, which was established in 1989.* The Soviet Union also had a hotline with Erich Honecker as leader of the former East-German Republic (DDR) and during a short period before East and West Germany were united in 1991, there was a hotline between Honecker and Helmut Kohl.*

Eventually, the hotline between Bonn and Washington did get an upgrade, and the STU-I was replaced by the Integrated Services Telephone (IST). Unlike the STU phones, which are able to encrypt the voice audio themselves, the IST has no encryption capability. Instead, it is connected to a central switch, which separates secure and non-secure traffic, after which the secure traffic is encrypted in bulk by a network encryptor.
On the far right of this photo of the chancellor’s office, we can recognize an IST telephone on almost the same spot as where the STU-I phone set was:

On October 3, 1990, East and West Germany were reunited and it was decided to make Berlin the capital again. After being elected chancellor late 1998, Gerhard Schröder moved to Berlin in 1999 and occupied the brand new Chancellery building in May 2001. With over 300 office rooms, this is said to be the largest government headquarters building in the world.

There are several pictures available of the chancellor’s office in the Berlin Kanzleramt building, but no one in which equipment for the hotline can be recognized. If this telephone link is still operational, it will be part of the “Head of State network”, which is used by the US president to communicate with foreign leaders and was upgraded to an IP-network by the White House Communications Agency (WHCA) in 2009.

Angela Merkel in her office in the new Chancellery building in Berlin, 2016
On her desk there are two regular high-end office phones,
apparently one for secure and one for non-secure calls

In October 2013 it was revealed that NSA had tried to eavesdrop on chancellor Merkel’s non-secure cell phone. This target was set in 2002, when Merkel was CDU party leader and because then Bundeskanzler Gerhard Schröder refused to join the US in the war against Iraq, the US government was probably interested in knowing the position of his main political opponent.

Although Merkel was an obvious espionage target, the fact that the Americans did so too made her angry: “Spying among friends – that simply isn’t done.” She expressed this to president Obama in a phone call on October 23, 2013 and already on July 3, she had talked to him about the Snowden-revelations about Germany. It’s not known whether these calls were made using the hotline of the Heads of State network.

This would have been rather ironic, but also typical for the world of espionage and signals intelligence, that on one hand, NSA tried to eavesdrop on chancellor Merkels cell phone, while on the other hand, the US provided highly encrypted equipment for the hotline between both countries. 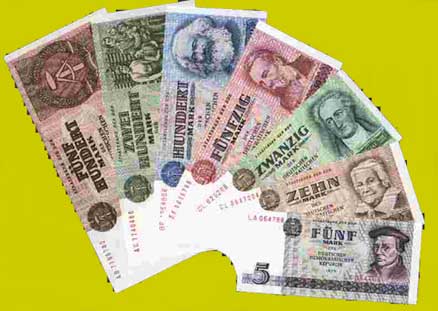 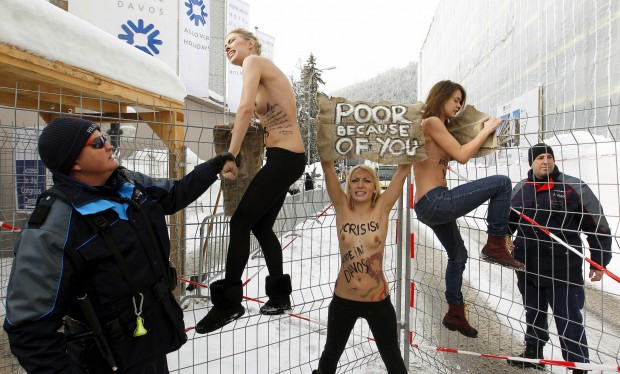 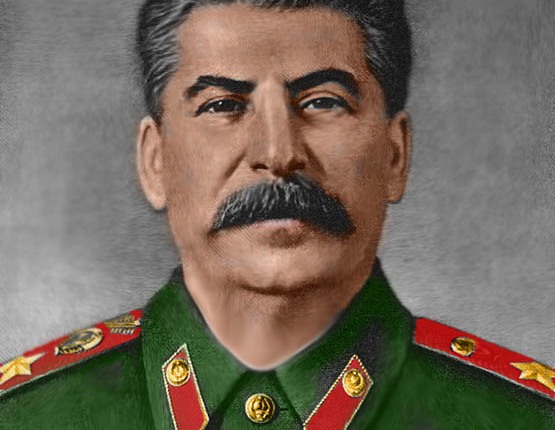