The following document contains files related to the Minnesota Bureau of Criminal Apprehension’s investigation into allegations that law enforcement officers participating in Drug Recognition Evaluator (DRE) courses provided drugs to sober people they had picked up from Peavey Plaza in downtown Minneapolis where protesters connected with Occupy Minnesota had been located since April 2012.  The officers then used the intoxicated subjects for their training course, sometimes providing them with rewards like food or cigarettes, and then returned them to the Plaza. Though the investigation confirms many aspects of the story and a Sheriff’s Deputy admitted to the DRE course instructor that he had witnessed his partner in the course providing marijuana to subjects, the Minnesota Bureau of Criminal Apprehension found that there was insufficient evidence to sustain charges and obtain convictions against any of the officers involved. This was partly due to the fact that 29 former officers and employees associated with the program refused to testify, blocking the investigation. For more information on the file, see Dan Feidt’s article on the documents and watch the video report he helped produced in May 2012 which played a significant role in raising public awareness of the issue and spurring the investigation. 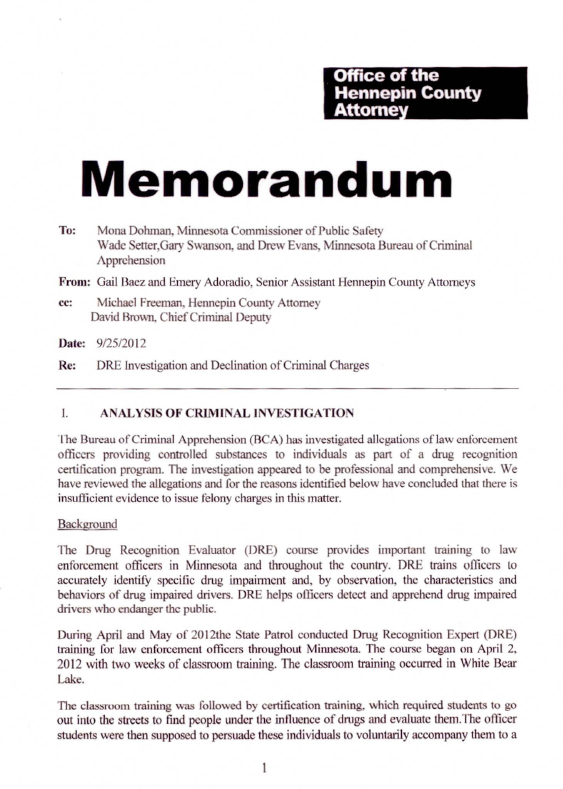 The Bureau of Criminal Apprehension (BCA) has investigated allegations of law enforcement officers providing controlled substances to individuals as part of a drug recognition certification program. The investigation appeared to be professional and comprehensive. We have reviewed the allegations and for the reasons identified below have concluded that there is insufficient evidence to issue felony charges in this matter.

During April and May of 2012 the State Patrol conducted Drug Recognition Expert (DRE) training for law enforcement officers throughout Minnesota. The course began on April 2, 2012 with two weeks of classroom training. The classroom training occurred in White Bear Lake.

The classroom training was followed by certification training, which required students to go out into the streets to find people under the influence of drugs and evaluate them. The officer students were then supposed to persuade these individuals to voluntarily accompany them to a Richfield training facility where they would provide a urine sample. This sample would then be tested to determine whether the participant was impaired as the officer had believed, and if so, what drug had been ingested. To encourage cooperation, officers never recorded participants true names.

On May2, 2012 allegations were made in the local media that DRE officers were not just seeking already “high” people to participate in testing. Allegations were that officers were providing controlled substances to sober people so that they could become “high” and then participate in testing. One individual, Forest Oliver, claimed that he had participated three times in the DRE testing and DRE officers had given him marijuana on each occasion. Some of these allegations had appeared in previous days on YouTube.

In response to these allegations, instructors asked their class whether they had engaged in such conduct or had heard of any classmates doing so. They emphasized that DRE students should not provide potential test participants with controlled substances.

No DRE officer admitted in class to knowledge of such conduct. However, after class that day on May 3, 2102, Chisago Deputy Sheriff Andrew Mahowald told head instructor State Patrol Sgt. Ricardo (Rick) Munoz that he had witnessed his DRE partner, Hutchinson Officer Karl Willers, provide marijuana to test subjects. Mahowald coming forward with this information ultimately led to Hutchinson Police Chief Hatten requesting a BCA investigation of allegations regarding Hutchinson officers. 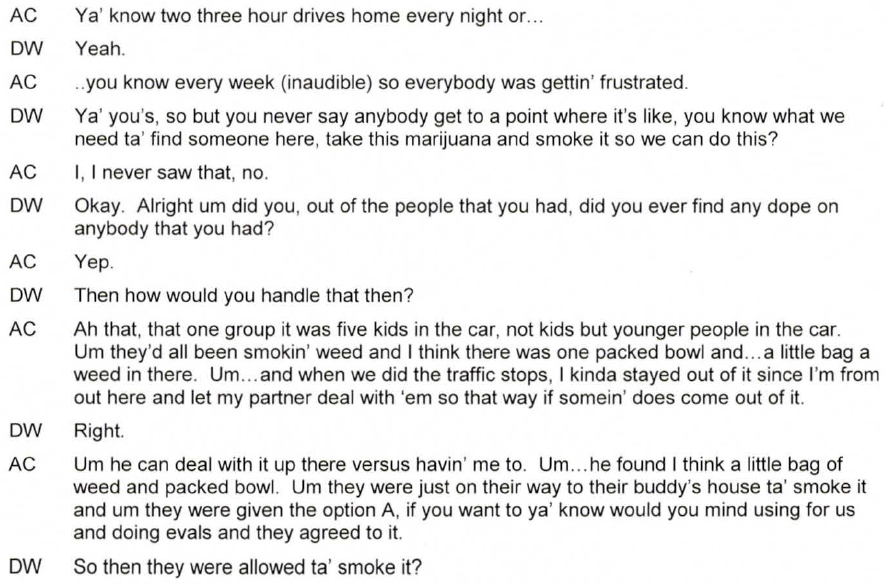 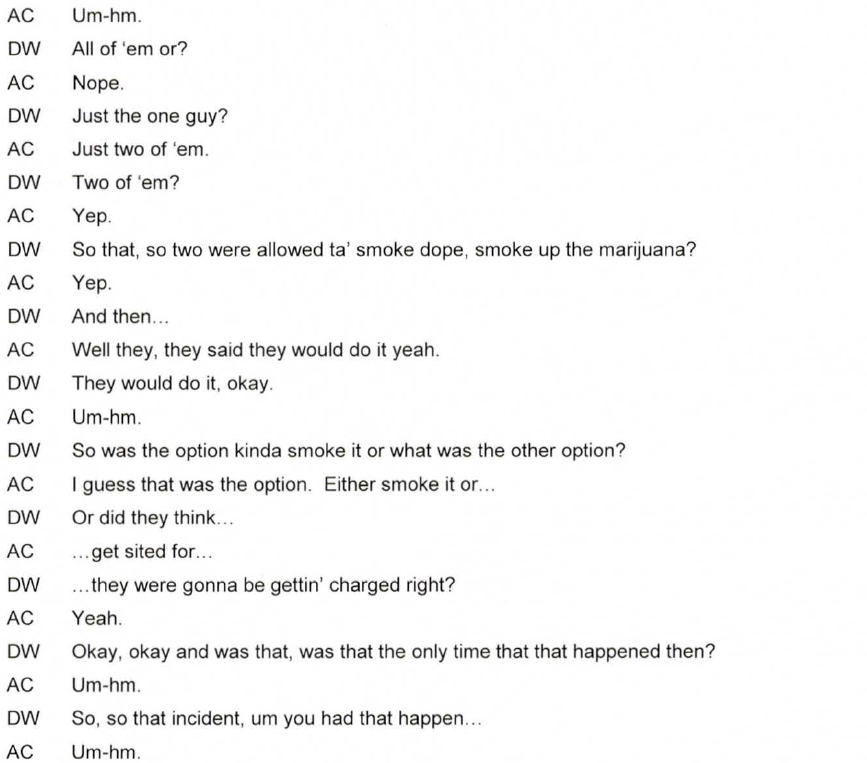 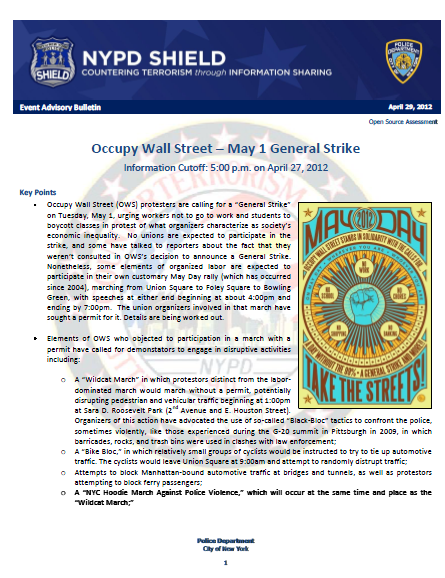 Occupy Wall Street (OWS) protesters are calling for a “General Strike” on Tuesday, May 1, urging workers not to go to work and students to boycott classes in protest of what organizers characterize as society’s economic inequality. No unions are expected to participate in the strike, and some have talked to reporters about the fact that they weren’t consulted in OWS’s decision to announce a General Strike. Nonetheless, some elements of organized labor are expected to participate in their own customary May Day rally (which has occurred since 2004), marching from Union Square to Foley Square to Bowling Green, with speeches at either end beginning at about 4:00pm and ending by 7:00pm. The union organizers involved in that march have sought a permit for it. Details are being worked out.

The “General Strike” was initially proposed by the Los Angeles node of OWS in November 2011, endorsed by Occupy Oakland at the end of January 2012, and subsequently endorsed by the OWS New York General Assembly on
February 14.

There are fissures within OWS, but a “respect for diversity of tactics,” which includes everything from peaceful protests to the kind of vandalism directed at Starbucks in April, when demonstrators tried to smash the windows at the Starbucks location at Astor Place, has been embraced by the movement.

Below is a list of events that are scheduled to be held on May 1. Although the list is comprehensive, various OWS postings have called for autonomous actions, splinter demonstrations, and flash mobs.

The General Strike is the first of several major global demonstrations that the OWS movement has played a role in planning, including demonstrations scheduled for May 12, May 15, and May 17-21.3 As such, it should be expected that organizers have emphasized the importance of turnout and will be seeking maximum media coverage.

Political fissures that are present within the OWS movement may impact the strategies of demonstrators during individual protest actions; in particular, the Wildcat March is not an officially sanctioned OWS march and may attract militant elements from inside and outside the OWS movement that may seek to directly confront law enforcement officials using barricades, riot shields, and possibly weapons such as pipes and rocks.

Although OWS organizers have publicized a large number of the marches, demonstrations, and activities that will take place throughout the day, it should be expected that “pop-up” demonstrations, splinter demonstrations, and flash mobs may occur at any time, especially during “evening actions” that are planned for 7:00pm and later.

In their planning, the OWS NYCGA has endorsed solidarity based on a “respect for a diversity of tactics,” which suggests that autonomous actions of demonstrators using Black Bloc tactics may occur at any time.

Federal Hall National Memorial is announcing a temporary change to how the public will access the building. Taking this action affords visitors safe access to the site without interfering with those participating in 1st amendment activities at the site.

The steps of Federal Hall National Memorial have replaced the sidewalks for the Occupy Wall Street
encampment. Located across Wall Street from the New York Stock Exchange, it is one of the most
popular tourist stops in NYC.

The protest is described by OWS as training for a worldwide General Strike on 1 May 2012. More:

For the third consecutive night, Occupy Wall Street protesters used a tactic that many of them hope will emerge as a replacement for their encampment at Zuccotti Park, which was disbanded by the police in November. Norman Siegel, a prominent civil-rights lawyer who visited the protesters on Wednesday night, said a decision by a federal court in Manhattan arising from a lawsuit in 2000 allowed the protesters to sleep on sidewalks as a form of political expression so long as they did not block doorways and took up no more than half the sidewalk.The protesters first cited that ruling last week while sleeping outside bank branches near Union Square, but said this week that they wanted so-called sleep-outs to occur nightly around the New York Stock Exchange. An organizer, Austin Guest, said protesters had scheduled such events for Friday night at four other spots, each related to the Occupy Wall Street message that the financial system benefits the rich and corporations at the expense of ordinary citizens. The protesters’ presence on and near Wall Street has drawn the attention of the police, but officers have not dislodged them.

Earlier this week, Reddit.com announced that they would be blacking out their site on January 18th. Likewise, many of us should take similar action versus this bill. The damage it would cause to our internet infrastructure would be irreparable. What we propose is a simple, but effective message for any webmasters to use on their site on this date.

The following will present a blackout banner when users visit your site, which can be circumvented by clicking anywhere:

The following will blackout an element of a specific id:

Sasha Gerrand kindly created a wordpress plugin to easily implement this. Check it out on github.

Created by @sirpengi and Jacob Miller

The Stop Online Piracy Act (SOPA, H.R. 3261) is on the surface a bill that attempts to curb online piracy. Sadly, the proposed way it goes about doing this would devastate the online economy and the overall freedom of the web. It would particularly affect sites with heavy user generated content. Sites like Youtube, Reddit, Twitter, and others may cease to exist in their current form if this bill is passed.

The Protect IP Act (PIPA, S. 968) is SOPA’s twin in the Senate. Under current DMCA law, if a user uploads a copyrighted movie to sites like Youtube, the site isn’t held accountable so long as they provide a way to report user infringement. The user who uploaded the movie is held accountable for their actions, not the site. PIPA would change that – it would place the blame on the site itself, and would also provide a way for copyright holders to seize the site’s domain in extreme circumstances.

The Electronic Frontier Foundation laid out four excellent points as to why the bills are not only dangerous, but are also not effective for what they are trying to accomplish: