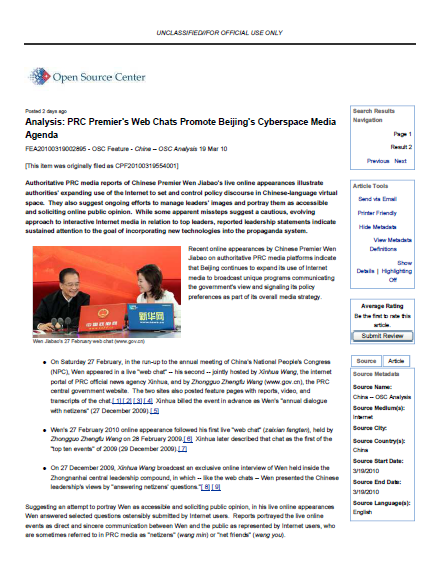 Recent online appearances by Chinese Premier Wen Jiabao on authoritative PRC media platforms indicate that Beijing continues to expand its use of Internet media to broadcast unique programs communicating the government’s view and signaling its policy preferences as part of its overall media strategy.

Suggesting an attempt to portray Wen as accessible and soliciting public opinion, in his live online appearances Wen answered selected questions ostensibly submitted by Internet users. Reports portrayed the live online events as direct and sincere communication between Wen and the public as represented by Internet users, who are sometimes referred to in PRC media as “netizens” (wang min) or “net friends” (wang you).

The verdicts were announced by Loretta E. Lynch, U.S. Attorney for the Eastern District of New York.

GDC, based in Long Island City, Queens, is a holding company that owns various subsidiaries, including JDC Lighting, a lighting distributor; Unalite Electric and Lighting, a lighting maintenance company; and Hudson Bay Environments Group, a furniture distributor. The evidence included the testimony of GDC’s former chief financial officer and two GDC accountants, all three of whom had previously pleaded guilty to fraud charges arising from the scheme. At trial, the government proved Dupree and others gave Amalgamated Bank false financial information for GDC in which they had fraudulently inflated the company’s accounts receivables in order to obtain initially, and then maintain, credit lines totaling approximately $21 million. For example, the defendant represented to Amalgamated Bank in writing in November 2009 that GDC had $25.2 million in accounts receivables when, in fact, it had only $9 million. The evidence proved that the conspirators inflated the accounts receivables by a variety of means, including by recording fake sales that had never taken place in the corporate books. According to the trial testimony, the scheme unraveled when one of the accountants turned himself into the FBI and cooperated in the government’s investigation in an undercover capacity for approximately two months.

“The defendant Courtney Dupree defrauded an FDIC insured bank out of millions of dollars by lying about his company’s financial condition,” stated U.S. Attorney Lynch. “Executives who abuse positions of influence and trust should expect to be investigated and prosecuted to the full extent of the law.”

U.S. Attorney Lynch extended her grateful appreciation to the FBI and the U.S. Postal Inspection Service, the agencies responsible for leading the government’s criminal investigation.

This case was brought in coordination with President Barack Obama’s Financial Fraud Enforcement Task Force. President Obama established the interagency Financial Fraud Enforcement Task Force to wage an aggressive, coordinated and proactive effort to investigate and prosecute financial crimes. The task force includes representatives from a broad range of federal agencies, regulatory authorities, inspectors general, and state and local law enforcement who, working together, bring to bear a powerful array of criminal and civil enforcement resources. The task force is working to improve efforts across the federal executive branch, and with state and local partners, to investigate and prosecute significant financial crimes, ensure just and effective punishment for those who perpetrate financial crimes, combat discrimination in the lending and financial markets, and recover proceeds for victims of financial crimes. For more information about the task force, visit http://www.stopfraud.gov.

This report was originally released by the Chinese central bank before later being removed. For more explanation of the report and its contents, see:

China’s rulers say corrupt cadres are the nation’s worst enemy. Now, according to a report that was given widespread coverage this week in local media, Beijing says that enemy resides overseas, particularly in the U.S.

The 67-page report from China’s central bank looks at where corrupt officials go and how they get their money out. A favored method is to squirrel cash away with the help of loved ones emigrating abroad, schemes that often depend on fake documents.

News of the study got prominent notice this week in Chinese media. A sample headline from page one of the Shanghai Daily on Thursday: “Destination America For China’s Corrupt Officials.”

The reports said the study was posted to the website of China’s central bank. While the document remains widely available in Chinese cyberspace, the report – dated June 2008 and identified as “confidential” – no longer appears on the People’s Bank of China website.

The central bank didn’t respond to requests for comment.

Though the report reads like an academic study, it doesn’t cite a clear conclusion.

Instead, it is broken into two main sections, the first starting with estimates that up to 18,000 corrupt officials and employees of state-owned enterprises have fled abroad or gone into hiding since the mid-1990s. They are suspected of pilfering coffers to the tune of 800 billion yuan, or $123 billion — a sum that works out to 2% of last year’s gross domestic product.

America is the destination most favored by high-ranking corrupt Chinese officials fleeing the country with large sums of money, according to a report by China’s central bank.

Other popular destinations include Australia and the Netherlands.

Those unable to get visas for Western countries opt for temporary stays in small countries in Africa, Latin America and eastern Europe while they wait for a chance to move to more developed countries, the People’s Bank of China report said.

The report cited research by the Chinese Academy of Social Sciences which revealed that about 16,000 to 18,000 government employees, police officers, judicial officers, senior managers of government institutions and state-owned companies, as well as employees of Chinese organizations in foreign countries, had escaped abroad or gone missing since the middle of the 1990s.

The money they carried with them is said to add up to 800 billion yuan (US$123 billion).