German intelligence is sharing large swathes of telecommunications data with the US – according to latest revelations published in Der Spiegel magazine. Documents provided by whistleblower Edward Snowden show that the degree of surveillance cooperation between Berlin and Washington is higher than officials would like to admit. READ MORE: http://on.rt.com/ar77zw 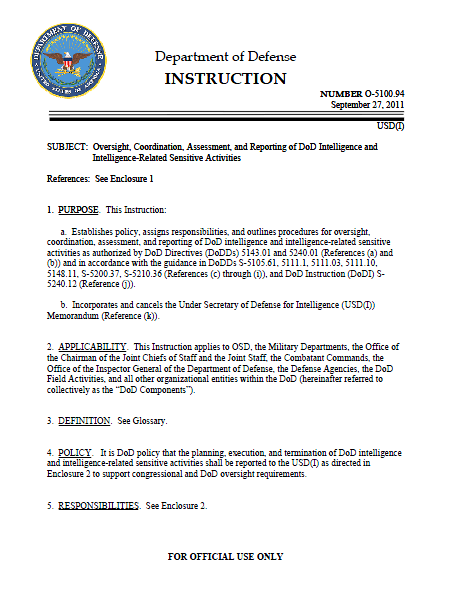 1. USD(I). The USD(I) shall provide a quarterly report to the congressional intelligence, appropriations, and armed services committees, including the information required by section 8062 of Public Law 112-10 (Reference (m)); DoD oversight and senior Executive Branch officials; and designated leaders of the Intelligence Community. This report is commonly referred to as the “Clandestine Quarterly Activities Report” (CQ) and is comprised of information from DoD Components regarding intelligence and intelligence-related sensitive activities conducted during the previous fiscal quarter.

2. DEPUTY UNDER SECRETARY OF DEFENSE FOR INTELLIGENCE AND SECURITY (DUSD(I&S)). The DUSD(I&S), under the authority, direction, and control of the USD(I), shall:

a. Develop and coordinate policy and oversee policy implementation for DoD intelligence and intelligence-related sensitive activities in accordance with References (a), (b), (c), and this Instruction.

b. Coordinate with the Assistant Secretary of Defense for Special Operations and Low Intensity Conflict and Interdependent Capabilities (ASD(SO/LIC&IC)) for sensitive special operations CQ submissions and other staff actions related to intelligence and intelligence-related sensitive activities.

d. Review and edit CQ submissions, to include the counterintelligence (CI) and human intelligence (HUMINT) CQ submissions from the Defense CI and HUMINT Center (DCHC); compile and distribute the CQ to meet congressional and DoD requirements.

e. Assess the effectiveness of activities in the CQ and provide recommendations to senior leaders.

h. Establish procedures to fulfill the duties and responsibilities outlined in this Instruction that facilitate reviews across classification compartments.

i. Develop and maintain the automated architecture and processes to archive, rapidly retrieve, and coordinate information related to DoD intelligence and intelligence-related sensitive activities.

k. Implement procedures to allow Office of the Under Secretary of Defense for Intelligence (OUSD(I)) functional directorates to review and comment on CQ submissions as part of the editing process.

3. DIRECTOR, DEFENSE INTELLIGENCE AGENCY (DIA). The Director, DIA, under the authority, direction, and control of USD(I) and through the Director, DCHC, shall:

b. Forward a consolidated CQ submission for the preceding fiscal quarter simultaneously to the OUSD(I) Sensitive Activities Directorate and the OUSD(I) HUMINT and CI Directorate not later than February 8, May 8, August 8, and November 8, respectively. Submit reports in the format outlined in the appendix to this enclosure.

4. ASD(SO/LIC&IC). The ASD(SO/LIC&IC), under the authority, direction, and control of the Under Secretary of Defense for Policy, shall prepare and submit a report summarizing DoD theater special operations forces sensitive activities for the preceding fiscal quarter to the OUSD(I) Sensitive Activities Directorate not later than January 18, April 18, July 18, and October 18, respectively. Submit reports in the format outlined in the appendix to this enclosure.

5. ASSISTANT TO THE SECRETARY OF DEFENSE FOR INTELLIGENCE OVERSIGHT (ATSD(IO)). The ATSD(IO) shall exercise oversight responsibilities for intelligence and intelligence-related sensitive activities in accordance with References (g), (i), and (j).

a. Report DoD intelligence and intelligence-related sensitive activities, other than CI and HUMINT activities, for the preceding fiscal quarter to the OUSD(I) Sensitive Activities Directorate not later than January 18, April 18, July 18, and October 18, respectively. Submit reports in the format outlined in the appendix to this enclosure.

c. Report significant changes that may emerge in the interval between CQ reports simultaneously to the DCHC and the OUSD(I) Sensitive Activities Directorate as soon as they are identified.

The Camorra, the Naples mafia, is Italy’s bloodiest organised crime syndicate. It has killed thousands and despite suffering many setbacks is as strong as ever. It is into drug trafficking, racketeering, business, politics, toxic waste and even the garbage disposal industry. Naples’s recent waste crisis was in part blamed on the crime syndicate. Its grip on the city is far reaching.

Talking to Camorra insiders who have never spoken to the media before, and drawing on interviews with Camorra victims who are fighting back, reporter Mark Franchetti investigates Italy’s deadliest mafia to learn how it has survived so long in a country at the heart of Europe and what it will take to defeat it.

PARLIAMENTARY OVERSIGHT OF SECURITY AND INTELLIGENCE AGENCIES IN THE EUROPEAN UNION

This study evaluates the oversight of national security and intelligence agencies by parliaments and specialised non-parliamentary oversight bodies, with a view to identifying good practices that can inform the European Parliament’s approach to strengthening the oversight of Europol, Eurojust, Frontex and, to a lesser extent, Sitcen. The study puts forward a series of detailed recommendations (including in the field of access to classified information) that are formulated on the basis of in-depth assessments of: (1) the current functions and powers of these four bodies; (2) existing arrangements for the oversight of these bodies by the European Parliament, the Joint Supervisory Bodies and national parliaments; and (3) the legal and institutional frameworks for parliamentary and specialised oversight of security and intelligence agencies in EU Member States and other major democracies.

As this study’s analysis of oversight of intelligence agencies at the national level demonstrates, information is the oxygen that sustains oversight; a mandate to oversee an agency’s work is of limited use unless it is accompanied by access to the relevant information. It will be extremely difficult to strengthen parliamentary oversight of the AFSJ bodies without clear and predictable rules and procedures for the EP to access relevant information from these bodies, the Commission and the Council. While access to relevant information is fundamental to oversight, the professional handling of this information by overseers is also crucial for effective oversight. Accordingly, improved access to classified information by the EP will need to be accompanied by the development of appropriate procedures for the protection of this information, as well as an ongoing commitment from MEPs to handle classified information in a professional manner.

Recommendation 11: New regulations on the European Parliament’s access to classified information should be decoupled from legislation on public access to information.

4.1.1. The rationale for oversight of intelligence agencies

Many states created parliamentary and other specialised bodies to oversee intelligence agencies in light of revelations about their involvement in illegal and/or improper activities, e.g., Canada, the Czech Republic, Norway, Poland, South Africa, and the US. Notably, during or immediately after the Cold War, it became clear that in many Western states, governments had used intelligence agencies to surveil and disrupt persons involved in legitimate expressions of the rights to freedom of association, assembly and expression. Elsewhere, intelligence agencies were found to have exceeded their legal mandates and powers in tackling domestic terrorism. Perhaps the egregious violations of human rights by intelligence agencies took place in communist/authoritarian regimes, where intelligence agencies were an integral part of the repressive state apparatuses which permeated all areas of society. Against this backdrop, effective oversight (and legal regulation) of intelligence agencies came to be seen as essential for ensuring that they contribute to the security of the populations they serve without undermining democratic processes and human rights. That is, to ‘secure democracy against internal and external enemies without destroying democracy in the process’. Needless to say, the development of oversight of the EU’s AFSJ bodies is taking place in a vastly different climate from the types of conditions that led to the establishment of oversight bodies on the national level. Arguments for robust oversight of intelligence agencies can be distilled into five main areas.

First, and perhaps most importantly, the law gives most intelligence agencies powers that permit them to restrict human rights and which, if misused, could result in the violation of human rights. Indeed, as Canada’s Justice O’Connor stated in the Arar Inquiry: ‘national security activities involve the most intrusive powers of the state: electronic surveillance; search, seizure and forfeiture of property; information collection and exchange with domestic and foreign security intelligence and law enforcement agencies; and, potentially, the detention of and prosecution of individuals’. Intelligence agencies are necessarily given a considerable amount of discretion in their use of intelligence collection powers, which increases the scope for such powers to be misused. In view of this, oversight is necessary to help ensure that such powers are used in accordance with national and international law.

Second, on a national level, the political misuse of intelligence agencies has always been a risk, primarily because these agencies can be used to unlawfully gather information about political opponents. Oversight is seen to be an essential safeguard against incumbent governments using intelligence agencies to protect or promote party political interests. This is less of a concern at the EU level because there is not the same direct relationship of control between the executive and the agencies. Perhaps more importantly, the fact that 27 Member States, the Commission and Council are all involved in the political control of these agencies means that there are in-built checks and balances against there (mis)use by any one party or interest group.

Third, the secrecy surrounding national intelligence agencies shields them from the processes of public accountability which apply to public bodies in democracies. For example, these agencies are not usually particularly open with the media and are often exempt from freedom of information legislation. This makes it difficult for the media, civil society organisations and the public more generally to scrutinise the intelligence agencies’ work. This further increases the need for oversight by independent bodies that have access to information not available to the general public.

Independent oversight of the work of intelligence agencies helps to ensure that they are as effective as possible.

Adventurer and journalist Simon Reeve heads to Cuba to find a communist country in the middle of a capitalist revolution. Two years ago Cuba announced the most sweeping and radical economic reforms the country has seen in decades. From ending state rationing to cutting one million public-sector jobs, one of the last communist bastions in the world has begun rolling back the state on an unprecedented scale. Simon Reeve meets ordinary Cubans whose lives are being transformed, from the owners of fledgling businesses to the newly rich estate agents selling properties worth up to 750,000 pounds.

In this hour-long documentary for the BBC’s award-winning This World strand, Simon gets under the skin of a colourful and vibrant country famous for its hospitality and humour and asks if this new economic openness could lead to political liberalisation in a totalitarian country with a poor human rights record. Will Cuba be able to maintain the positive aspects of its long isolation under socialism – low crime, top-notch education and one of the best health systems in the world – while embracing what certainly looks like capitalism? Is this the last chance to see Cuba before it becomes just like any other country?