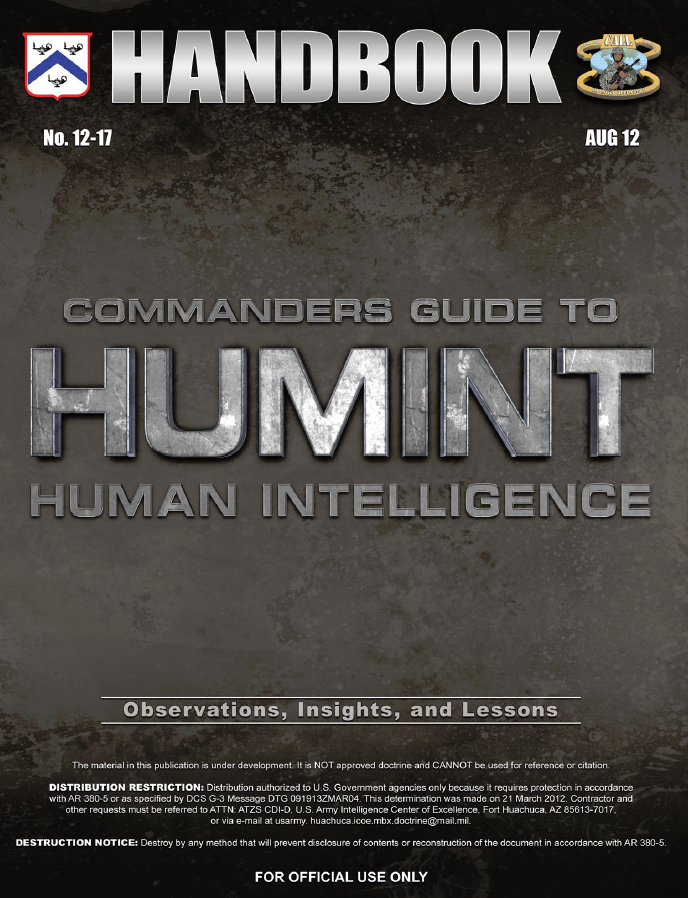 Army commanders rely upon timely, relevant, and accurate combat information and intelligence in order to successfully plan, prepare, and execute operations. Human intelligence (HUMINT) and counterintelligence (CI) are two critical assets commanders have, either organic to their unit’s table of organization and equipment (TOE) or through attachment from a supporting command, which can provide input to both combat information and intelligence. While there are similarities between the methodology and tactics, techniques, and procedures (TTP) used by HUMINT and CI, their training and missions are separate and distinct.

This publication serves as a guide to U.S. Army commanders with organic or attached HUMINT elements supporting their unit at the tactical level. This guide is designed to provide the supported commander with an understanding of the mission, capabilities, and effective employment of HUMINT personnel.

1-1. HUMINT collection capabilities include the ability to—

1-15. Some U.S. Army and MI leaders often misunderstand the differences between the HUMINT and CI disciplines or try to use the two interchangeably. While both disciplines utilize similar methodologies (talking to a human source) and TTP (used to collect and exploit the information), the overriding differences between the two collection activities are the type of information targeted and the objective of the collection. Both HUMINT and CI disciplines require specific training and certification criteria for those agents and collectors allowed to conduct these operations. Additionally, both disciplines have legal restrictions on who is authorized to conduct these operations, as well as when and where.

USE OF HUMINT COLLECTORS

A-26. All U.S. Army commanders, especially commanders of MI units, must understand the capabilities and how to employ their HUMINT Soldiers to avoid misusing and wasting a valuable asset. HUMINT Soldiers are limited and valuable resources providing singular capabilities no one else can. The 2X can greatly assist the commander in understanding the full range of HUMINT capabilities and how to employ them in a manner which best assists the commander in obtaining PIRs, greater situational awareness, and a better understanding of the operational environment.

A-27. HUMINT collectors are Soldiers and are expected to conduct additional duties (for example, guard duty, escort duty, and others) like all unit Soldiers. However, HUMINT activities require significant time to establish and develop to fully support the commander. Even during times between significant operational activities (for example, patrols, raids, cordon and searches, and others), HCTs should be identifying and developing potential sources of information. The commander must balance assigning additional duties with their need for information to support current or future operations.

A-28. HUMINT collectors interact with and question other human beings and will often be a qualified linguist in the target area language. Based upon these skill sets, commanders may assign HUMINT collectors missions similar to activities often associated with civil affairs, MP, criminal investigative command, or interpreters or translators. However, this may be a misuse and potentially illegal. Requiring, or allowing, HUMINT collectors to perform functions outside their MOS can substantially degrade the HUMINT mission and the overall intelligence mission. This significantly reduces the amount of intelligence the commander receives and limits the commander’s situational awareness and situational understanding of the operational environment.