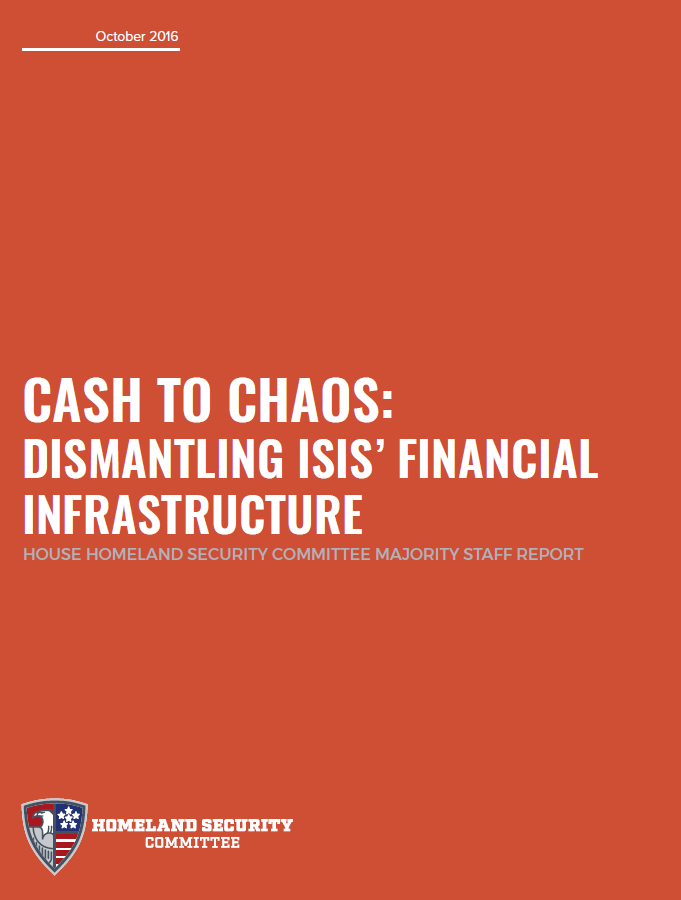 Despite battlefield losses, ISIS continues to operate its own terrorist pseudostate and claims a growing global footprint. At least 34 radical Islamist groups have pledged their allegiance to ISIS. As of this printing, the organization has managed to expand its presence to dozens of countries and territories—in addition to recruiting tens of thousands of fighters from over 120 nations. Most alarmingly, ISIS is driving an unprecedented surge of terror plots against the West and poses a persistent and grave threat to the U.S. homeland.

Their explosive growth stems in part from its ability to control territory and generate massive revenue flows from diverse sources. ISIS is unique in comparison to other terror groups in that it runs a state-like infrastructure designed to raise revenue and support government functions, such as providing social welfare services and waging war. While the United States has made progress in blunting the group’s momentum in Iraq and Syria, ISIS has proved to be a flexible and determined enemy that will regenerate and spread unless its revenue streams are cut off decisively.

Given the severity of the threat, the House Homeland Security Committee launched a review to examine ISIS’ financial infrastructure and U.S. Government’s efforts to dismantle it. The Committee’s Majority Staff reviewed the group’s revenue streams, examined U.S. Government activities to counter its finances, and developed findings and recommendations related to the issue.

Results of the Committee’s Review

This report is divided into two primary sections. First, it outlines the pillars of ISIS’ financial infrastructure. Second, it makes 14 key findings and provides accompanying recommendations. Overall, the Committee finds that:

• The Obama Administration has weakened America’s no-negotiation stance toward terrorist groups who kidnap U.S. persons, and it has failed to take meaningful action to deter foreign governments from making ransom payments to ISIS and other terror groups.

• The U.S. Government lacks clarity about the extent to which terrorist groups like ISIS are using online fundraising platforms to generate income.

• The U.S. Government has largely failed to develop a comprehensive government-wide approach to help foreign partners build the capacity to combat terror financing.

• Efforts by foreign partners to crack down on ISIS’s cross-border smuggling and facilitation networks have so far been inadequate.

• Too few countries have effective financial intelligence units to connect the dots and disrupt terrorist transactions.

• ISIS has been able to withstand targeted sanctions because few countries enforce them.

• Many foreign countries rely on a patchwork system to share expertise and prosecute terror-related financial crimes, increasing the odds that terror financiers will slip through the cracks.

• Domestic and international law enforcement agencies have not put high-enough priority on tracking black market sales of cultural artifacts and antiquities, which have become a significant source of terrorist revenue.

• The U.S. Government does not have standardized internal controls in place across federal departments and agencies to prevent terrorists from using charities, nongovernmental organizations, non-profits, and humanitarian groups to raise and move money covertly.

• ISIS has been able to adapt to battlefield setbacks and generate new sources of revenue to support the group’s mission.