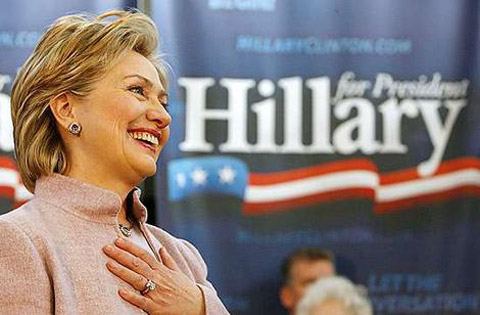 Hillary Clinton did not yet announce her run  for White House, but her super-wealthy political foes are hatching a massive $500 million plot to start an attack: The  “dirty tricks” campaign is aimed at wrecking the 2016 presidential campaign of the 66-year-old former first lady.

Sources say operatives are digging up details on at least eight Hillary “secrets!”

They will also try to use a variety of evidence to rip the covers off Hill­ary’s torrid love affairs with both men and women, according to in­siders

“Super-wealthy Anti-Clinton Factions are willing to spend half a billion dollars be­tween them to find out what Hillary has been hiding,” revealed a top political source.

“With that huge bankroll, conservative groups with underground operatives believe they can amass evidence that will ruin Hill­ary’s chances of becoming our first female president.”

Another insider added: “The word is out to ‘gut’ Hillary at any and all costs!”

And in a national inter­view on the FOX News Channel, former Demo­cratic volunteer Kathleen Willey – who has insinu­ated the Clintons were involved in the mys­terious deaths of her husband, Ed, and depu­ty White House counsel Vince Foster – accused Hillary of “ruining” and “terrorizing” people.

Foster and Willey, a Richmond, Va., lawyer, were both found dead of apparent self-inflicted gunshot wounds in 1993, the first year of Clinton’s presidency.

SECRET #1Foster was also the Clintons’ personal attorney, and the “dirty tricks” team is looking for two letters in sealed manila envelopes that disappeared from Foster’s White House office safe after his death on July 20. One envelope was addressed to then-Attorney General Janet Reno.

That “smoking gun” letter is believed to implicate Hillary in ordering the government’s at­tack on religious zealot David Koresh’s compound in Waco, Texas, in April 1993. The raid sparked a massive inferno that killed 74 men, women and children, in­cluding 12 kids under the age of 5 and two pregnant women.

“Investigators are out to show that during Bill’s first year in the White House, Hillary was abusing her power and actually making executive deci­sions, one of which was allegedly the raid on Waco.”

Marinka Peschmann – author of the 2012 book, “Following Orders: The Death of Vince Foster, Clinton White House Lawyer” – told The ENQUIR­ER that “the orders to raid Waco were from Hillary, but Janet Reno took the fall, and Vince Foster was devastated by what happened. I’m sure those doc­uments were destroyed. (But) if copies were to emerge today, they could de­stroy Hillary.”

SECRET #2 Peschmann also believes that Foster’s death trig­gered a massive cover-up by the Clinton administra­tion and declared: “Hillary should not be in the White House. She should be in jail.”

Researchers point out several suspicious details about Foster’s “suicide,” most notably that his fingerprints weren’t on the gun and the bullet that killed him was never found.

“For two decades, investigators, au­thors and media figures have declared that Vince Foster was murdered – and that he was Hillary’s longtime lover,” said a close source. “If Hillary is in­criminated in missing evidence in his death, it will stop her from becoming president.”

SECRET #3 Sources say material linking Hill­ary and Foster is being sought, and investigators also hope to prove the outrageous claim that Hillary had an affair with Webb Hubbell, a top Justice Department official. Hubbell was the youngest mayor in Little Rock, Ark., history and Hillary’s former partner at the Rose Law Firm. He eventually served 18 months in prison for embez­zlement.

“That affair came to light when a veterinarian who treated the Clinton family cat, Socks, at the White House claimed that he stumbled onto Hill­ary locked in a steamy embrace with a woman,” said the source. “It’s believed the woman is ready to ‘out’ Hillary and reveal details of their sex romps.

“Investigators are also running down other explosive rumors, includ­ing one that Hillary had a ‘hook-up’ with a handsome young male White House intern as retribution after the Lewinsky scandal came to light.”

SECRET #5 Plotters are also seeking definitive proof that, during the so-called “Zip­pergate” scandal, Hillary ordered secret investigators to dig up dirt on Lewinsky and her family, said the source.

“In one of the diary entries, Blair, who died in 2000, quotes Hillary call­ing Monica a “narcissistic loony toon,” said the insider. “That vicious dig could bring Monica out of the wood­work to attack Hillary – and confirm a hushed up secret probe that Hillary ordered against her and her family. This is a genuine fear of Hillary’s.”

Investigators also hope to expose a “secret breakdown” Hillary allegedly suffered after the scandal that nearly cost her husband the presidency, insiders say.

“Hillary went ballistic during a vicious fight with Bill and had to be medicated afterward,” said the source.

“The main interest is to determine what medi­cations Hillary may have been prescribed, and to prove that she’s unstable.”

Although it’s never been proven, rumors have swirled that “Hillary and Bill were connected to a major drug-running operation that was based in Arkansas and tied to a series of murders,” said the source. “There were allegations that an airport in Mena (Ark.) was used to smuggle in millions of dollars worth of cocaine and other drugs.

“The operation was tied to several murders, including a well-known drug-smuggler named Barry Seal.”

If it’s firmly established by the conservative group’s probe that Bill and Hillary were directly tied to these claims, the source says she’d face an intense media grilling that would explode her campaign.

“Washington Post” Watergate reporter Bob Woodward reported the incident in his 1996 book, “The Choice,” and once revived, “the revelation will make Hillary look like a fool,” said the source.

Perhaps the most devastating element of the plot to destroy Hillary is to expose a shocking “medical secret,” sources say. As The ENQUIRER has reported, a brain cancer scare came to light after Hillary suffered a concus­sion due to a fainting spell in December 2012.

After extensive testing, doctors discovered a blood clot in a vein between her brain and skull, and dissolved it with blood thinners.

But according to the source: “Plotters are deter­mined to show that Hillary isn’t healthy enough to serve a four-year term as president that would take her into her 70s.”