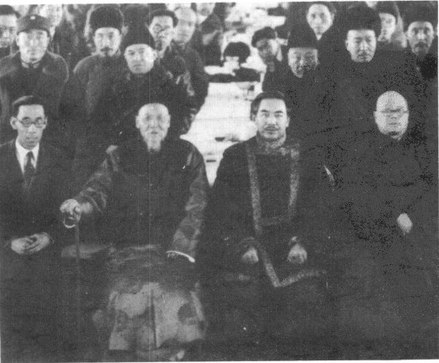 1. In August 1932 I sent letters to the Comintern and Mr. Stalin in which I briefly laid out my world view.

2. In this [letter] I consider it my duty to express deep gratitude for the great assistance you have given in calming Xinjiang and killing the bandit, Ma Zhongying.

3. In spite of the fact that I still am not a member of the Communist Party I have engaged in the study of Marxism and my faith in the triumph of Communism was a consequence of the study of historical materialism, “Das Kapital”, “The Communist Manifesto”, and “Critique of the Gotha Program”, which gives me the ability not to put myself in the ranks of blind imitators or collaborators.

A. The main importance of historical materialism is in the scientific explanation and interpretation of social development, in the evidence for the need to reorganize society, and in pointing out the ways for this reorganization.

B. On the basis of scientific methods and firmly established laws [like] “the law of the fall of profit” “Das Kapital” shows the inevitable demise of the hated capitalistic system at a certain stage of its development and the inevitability of the rise of Communism. Then he reveals a picture of the exploitation of the workers by the capitalists and the perniciousness (harm, malignance) of the surplus value they have created, and which factors are the causes of the appearance of the socialist revolution.