(U//FOUO) NCTC (National Counterterrorism) assesses that the Sunni extremist threat to the US before 9/11 was characterized by diverse extremist organizations and lone actors motivated by multiple ideological narratives and other factors, including Salafi jihadism, Palestinian nationalism, theological disputes within Islam, anti-Semitism, and anti-Hindu sentiments. We have identified a dozen successful attacks, four disrupted plots, and one attempt to set up an extremist training camp in the US between 1973 and 2001, underscoring the persistent threat from al-Qa‘ida–associated extremists, Palestinian terrorist groups, and Sunni extremist lone actors in the decades leading up to 9/11. 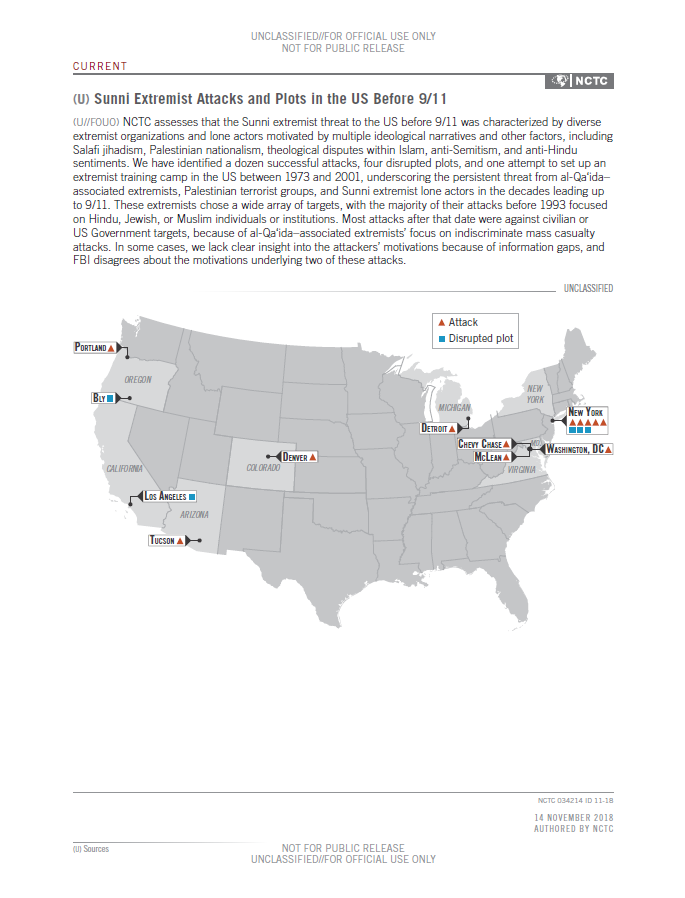 These extremists chose a wide array of targets, with the majority of their attacks before 1993 focused on Hindu, Jewish, or Muslim individuals or institutions. Most attacks after that date were against civilian or US Government targets, because of al-Qa‘ida–associated extremists’ focus on indiscriminate mass casualty attacks. In some cases, we lack clear insight into the attackers’ motivations because of information gaps, and FBI disagrees about the motivations underlying two of these attacks.