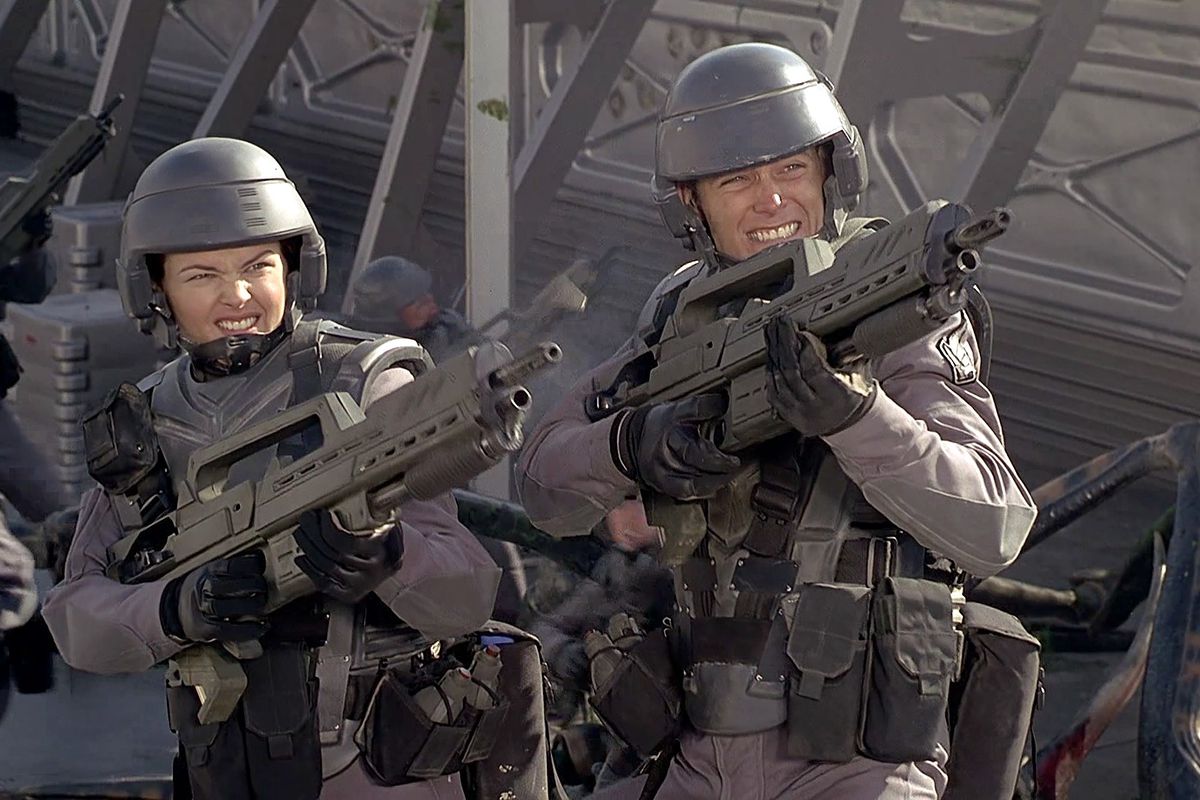 FM 3-14, Army Space Operations, provides an overview of space operations in the Army and is consistent and compatible with joint doctrine. FM 3-14 links Army space operations doctrine to joint space operations doctrine as expressed in JP 3-14, Space Operations and other joint doctrinal publications. This FM establishes guidance for employing space and space-based systems and capabilities to support United States (U.S.) Army land warfighting dominance. It provides a general overview of overhead support to Army operations, reviews national guidance and direction, and outlines selected unique space-related Army capabilities. The doctrine in this manual documents Army thought for the best use of space capabilities. This manual also contains tactics and procedures outlining how to plan, integrate, and execute Army space operations.

Space is a warfighting domain with different characteristics from air, land, sea, and cyberspace domains. Space is identified as one of the Global Commons as defined in the National Military Strategy of the United States of America. Army space operations enable Army and joint warfighting, and use of space capabilities is an inherently joint venture. The need for the Army to accomplish space operations is firmly established in national and Service level policies. Moreover, this FM is rooted in Army operations and consistent with Joint doctrine. Space capabilities and the space domain provide a global perspective as satellites allow routine access to denied areas of the Earth.

The space environment is harsh and the distances involved are vast, but it offers unique advantages that make it worthwhile to overcome the adversities of the operational environment. To that end, the space environment continues to become more congested, contested, and competitive. The uses of space are many, applications vary, and space-enabled capabilities are constantly evolving. It is important that Soldiers continue to look to the future with responsiveness, adaptability, and flexibility toward how space enables the Army’s warfighting functions in the conduct of unified land operations.

Army space operations includes all aspects of the employment of specialized Army space forces but also the spectrum of activities associated to the planning, preparation, integration and execution support required to ensure synchronized and effective space-based capabilities from all sources are available to support dominant land operations as part of Unified Action. Army space operations are heavily influenced by understanding the constraints, limitations, and operational needs of the land component users with regard to those space-based capabilities.

1-4. This FM is rooted in basic Army and joint doctrine that is characteristically progressive and evolving. Space is a warfighting domain with different characteristics from land, sea, air, and cyberspace domains. The Army depends on space operations to effectively execute unified land operations. Every Army warfighting function relies on space contributions to some degree to enhance the effectiveness of our combat forces. Space capabilities enable the Army to communicate, navigate, accurately target the enemy, protect, and sustain our forces.

1-5. The U.S. Army is one the largest consumers of space-based capabilities within Department of Defense (DOD). The Army depends on Army space forces (personnel, organizations, space and terrestrial systems, equipment, and facilities), to ensure full access to all current and future space capability in order to fight and survive on today’s area of operations. The Army must leverage the capabilities of space assets. Consistent with the inherent right of self-defense, the Army must deter others from interference and attack, defend our space systems, and contribute to the defense of multinational space systems. If deterrence fails, the Army must defeat efforts to attack its space assets. This must be done while operating in a global information environment against any threats. Consequently, the Army space capabilities must provide continuous, secure, global communications, space situational awareness, space control, and space force enhancement to Army and joint warfighters from strategic to tactical levels.

1-16. Department of Defense directive (DODD) 3100.10, Space Policy implements the National Space Policy and assigns responsibilities for space and space-related activities. This directive states the primary DOD goal is to provide operational space force capabilities to ensure the U.S. has the space power to achieve its national security objectives in accordance with the U.S. National Security Strategy. Additionally the U.S. National Military Strategy recognizes space as one of the global commons and notes that our ability to project power from the global commons may be at risk. The space domain is critical for Army operations, yet becoming increasingly more vulnerable to malicious actions that create a D3SOE. The space environment is continuously becoming more congested, contested, and competitive. Space capabilities and applications will be integrated into the strategy, doctrine, concepts of operations, education, exercises, and operations and contingency plans of U.S. military forces. DOD operational space force structure will be sufficiently robust, ready, secure, survivable, resilient, and interoperable.

1-33. Space is the ultimate high ground and gives land forces the advantage of a global, persistent perspective of the strategic, operational, and tactical situation. Space systems consist of satellites on orbit, ground stations, launch bases, and the communications links and capabilities. Space hosts communications transponders, observation posts for surveillance and reconnaissance, transmitters broadcasting location and exact time information, sensors for weather and other environmental data, and sensors that can warn of enemy actions.

1-34. Space is a domain like land, sea, air, and cyberspace within which military activities are conducted to achieve U.S. national security objectives. Space begins above the atmosphere of the Earth and extends infinitely outward. The U.S. does not formally recognize a lower limit to space. However, space is considered to be the region around the Earth with little atmosphere, where satellites are placed in orbit. Space operations are those enabling operations that create or present opportunities to employ space capabilities to enhance the warfighting potential of the U.S. military and multinational partners. Space operations are generally supported by satellites in orbits around the Earth. Space is interrelated with the other domains and properly integrating these complex functions with the other military activities is critical for successful operations.

1-35. The 1967 Outer Space Treaty, officially known as Treaty on Principles Governing the Activities of States in the Exploration and Use of Outer Space, Including the Moon and Other Celestial Bodies dictates satellites in orbit must be allowed free passage over countries. Nations cannot claim the space directly above them as their own, as they do with airspace. This allows the U.S., other countries, and commercial entities to orbit satellites that freely traverse or occupy positions while in space over other countries.

1-36. Space-based resources provide freedom of action, global reach, responsiveness, insights in an anti-access, area of denial arena, and are not constrained by geographic borders of otherwise geographically denied regions. Satellites are well suited for reconnaissance and surveillance, imagery, mapping, and intelligence operations because of the access they provide. However, operations in the space environment are bound by other constraints such as the laws of physics, international law, and policies that have a unique set of vulnerabilities.

2-15. The DIRSPACEFOR is responsible for:

Integration of space force enhancement, space control operations, and planning in joint operations on behalf of the combined force air component commander when acting as SCA;
Oversee day-to-day functions of the DIRSPACEFOR staff and accomplish assigned duties of SCA;
Provide the combined force air component commander and key staff counsel and training in space operations;
Assist with planning and executing theater space operations and applying space capabilities throughout the joint targeting cycle;
Assist in coordinating tailored space support for operations throughout the area of responsibility;
Work directly for the combined force air component commander as special staff providing advice on space capabilities and employment;
Ensure continuity of operations, focus, operational stability, and unity of command with multiple rotations of joint space personnel across the area of responsibility;
Conduct deliberate planning for contingency operations and exercises, and validate process;
Provide reachback support for all forward deployed space forces from all Services in area of responsibility;
Interact with multiservice space professionals within the combined air and space operations center; and
Provide insight and participate in special technical operations planning, as required.
2-16. During larger standing operations and in crisis planning and execution, the theater SCA function is supported with appropriate manning for staff support based upon the nature of the pending contingency. The manpower and expertise requirements will be reflected in the final approved joint manning document for that headquarters along with an identification of a responsible Service to fill the position. In most cases where the SCA is delegated to the Commander, Air Force forces with an assigned DIRSPACEFOR to support those functions, the Deputy DIRSPACEFOR is normally sourced as an Army space officer, as established in operations. An Army Deputy DIRSPACEFOR supports all the joint functions of the DIRSPACEFOR, can represent specific land component space-related needs and issues to the theater SCA for resolution. An Army Deputy DIRSPACEFOR also acts as an intermediary between DIRSPACEFOR staff and Army SSEs, ARSSTs, ASCE, JTAGS detachments, space situational awareness planning teams (SSAPT), and space control detachments.