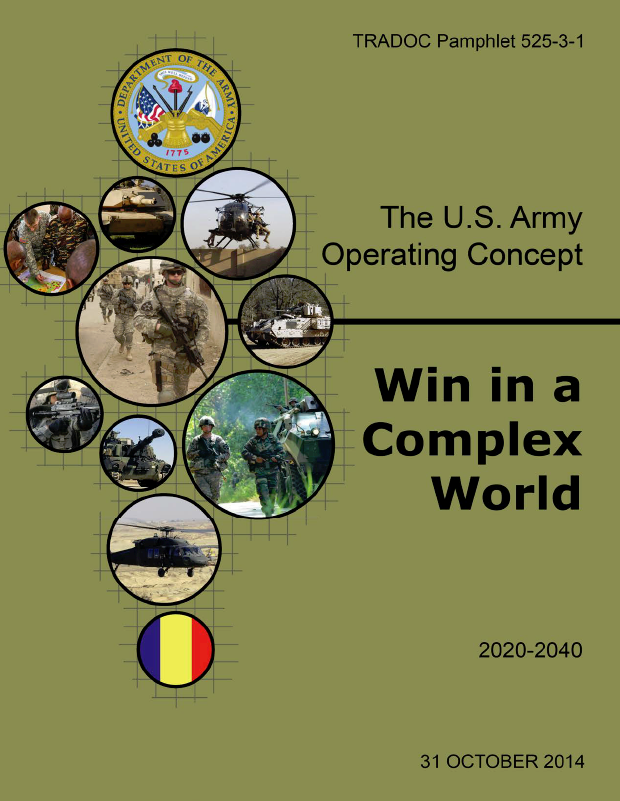 TRADOC Pamphlet 525-3-1 describes how future Army forces, as part of joint, interorganizational, and multinational efforts, operate to accomplish campaign objectives and protect U.S. national interests. It describes the Army’s contribution to globally integrated operations, and addresses the need for Army forces to provide foundational capabilities for the Joint Force and to project power onto land and from land across the air, maritime, space, and cyberspace domains. The Army Operating Concept guides future force development through the identification of first order capabilities that the Army must possess to accomplish missions in support of policy goals and objectives.

a. Diverse enemies will employ traditional, unconventional, and hybrid strategies to threaten U.S. security and vital interests. Threats may emanate from nation states or nonstate actors such as transnational terrorists, insurgents, and criminal organizations. Enemies will continue to apply advanced as well as simple and dual-use technologies (such as improvised explosive devices). Enemies avoid U.S. strengths (such as long-range surveillance and precision strike) through traditional countermeasures (such as dispersion, concealment, and intermingling with civilian populations). As new military technologies are more easily transferred, potential threats emulate U.S. military capabilities to counter U.S. power projection and limit U.S. freedom of action. These capabilities include precision-guided rockets, artillery, mortars, and missiles that target traditional U.S. strengths in the air and maritime domains. Hostile nation states may attempt to overwhelm defense systems and impose a high cost on the United States to intervene in a contingency or crisis. State and nonstate actors apply technology to disrupt U.S. advantages in communications, long-range precision fires, and surveillance. Enemy actions reduce U.S. ability to achieve dominance in the land, air, maritime, space, and cyberspace domains. Additionally, to accomplish political objectives, enemy organizations expand operations to the U.S. homeland. Enemies and adversaries will operate beyond physical battlegrounds and enemies will subvert efforts through infiltration of U.S. and partner forces (e.g., insider threat) while using propaganda and disinformation to effect public perception.

Paradoxically, the connectedness of networked devices within the U.S. presents adversaries with exploitable vulnerabilities.

b. The following five characteristics of the future operational environment are likely to have significant impact on land force operations.

(1) Increased velocity and momentum of human interaction and events. The speed at which information diffuses globally through multiple means increases the velocity, momentum, and degree of interaction among people. The diffusion of information via the Internet and social media amplifies and accelerates interaction between people, governments, militaries, and threats. Access to information allows organizations to mobilize people and resources locally, regionally, and globally. Disinformation and propaganda drive violence in support of political objectives. The compression of events in time requires forces capable of responding rapidly in sufficient scale to seize the initiative, control the narrative, and consolidate order.

(2) Potential for overmatch. Overmatch is the application of capabilities or use of tactics in a way that renders an adversary unable to respond effectively. Potential enemies invest in technologies to obtain a differential advantage and undermine U.S. ability to achieve overmatch. These technologies include long-range precision fires, air defense systems, electric fires, and unmanned aerial systems (UAS). Anti-access and area denial capabilities challenge the Joint Force’s ability to achieve air dominance and sea control as well as its ability to project power onto land from the air and maritime domains. Potential enemies develop cyberspace capabilities such as disruptive and destructive malware and space capabilities such as anti-satellite weapons to disrupt U.S. communications and freedom of maneuver. To prevent enemy overmatch, the Army must develop new capabilities while anticipating enemy efforts to emulate or disrupt those capabilities. To retain overmatch, the Joint Force will have to combine technologies and integrate efforts across multiple domains to present enemies with multiple dilemmas.

(3) Proliferation of weapons of mass destruction. WMD proliferation to diverse state and nonstate actors in the form of chemical, biological, radiological, nuclear, and high-yield explosive (CBRNE) weapons poses an increased threat to U.S. and international security. Adversaries share CBRNE knowledge, technology, and materiel. The risk of a nation losing control over nuclear assets increases as extremist organizations incite civil wars and establish control of territories, populations, and weapons. Moreover, directed energy and sophisticated CBRNE weapons could give adversaries unprecedented capabilities to threaten U.S. forces and civilian populations with mass casualties. Coping with CBRNE threats requires specially trained, equipped, and organized Army forces that have the ability to operate in inhospitable conditions, conduct reconnaissance to confirm or deny the presence of weapons, destroy enemy forces that possess those weapons, and secure territory to contain those weapons until CBRNE units reduce or neutralize them.

(5) Demographics and operations among populations, in cities, and in complex terrain. The percentage of the world’s population in urban areas will rise to sixty percent by 2030. Internal migration and higher birth rates contribute to increasing urbanization. Adversaries operate among the people in these urban areas and other complex terrain to avoid U.S. military advantages and they operate in cities because war, as a political phenomenon, is inherently about people. As cities grow, many governments fail to provide adequate security, employment, infrastructure, and services. Armed groups will exploit popular disaffection and weak governance. Urban areas become safe havens and support bases for terrorists, insurgents, or criminal organizations. Urban areas are potential scenes for mass atrocities. Enemies may use cities as launching platforms for long-range missiles that threaten allied as well as U.S. populations. Because urban environments degrade the ability to target threats with precision, joint operations will require land forces capable of operating in congested and restricted urban terrain (to include subsurface, surface, supersurface) to defeat those threats.24 Understanding the technological, geographic, political, and military challenges of the urban environment will require innovative, adaptive leaders and cohesive teams who thrive in complex and uncertain environments. Operating in urban environments will require decentralized combined arms and joint capabilities.

a. Emerging technologies hold promise for improving future force combat effectiveness. Because of the ease with which many technological advantages are copied or countered, the Army must emphasize how to combine multiple technological improvements and counter enemy efforts to adopt or disrupt new technologies. (See appendix C for additional detail on technologies.) The U.S. Army’s differential advantage over enemies derives, in part, from the integration of advanced technologies with skilled Soldiers and well-trained teams. These technologies and their potential to improve Army effectiveness include:

b. The technologies mentioned above are not all inclusive and may change as science and technological innovations grow and mature. 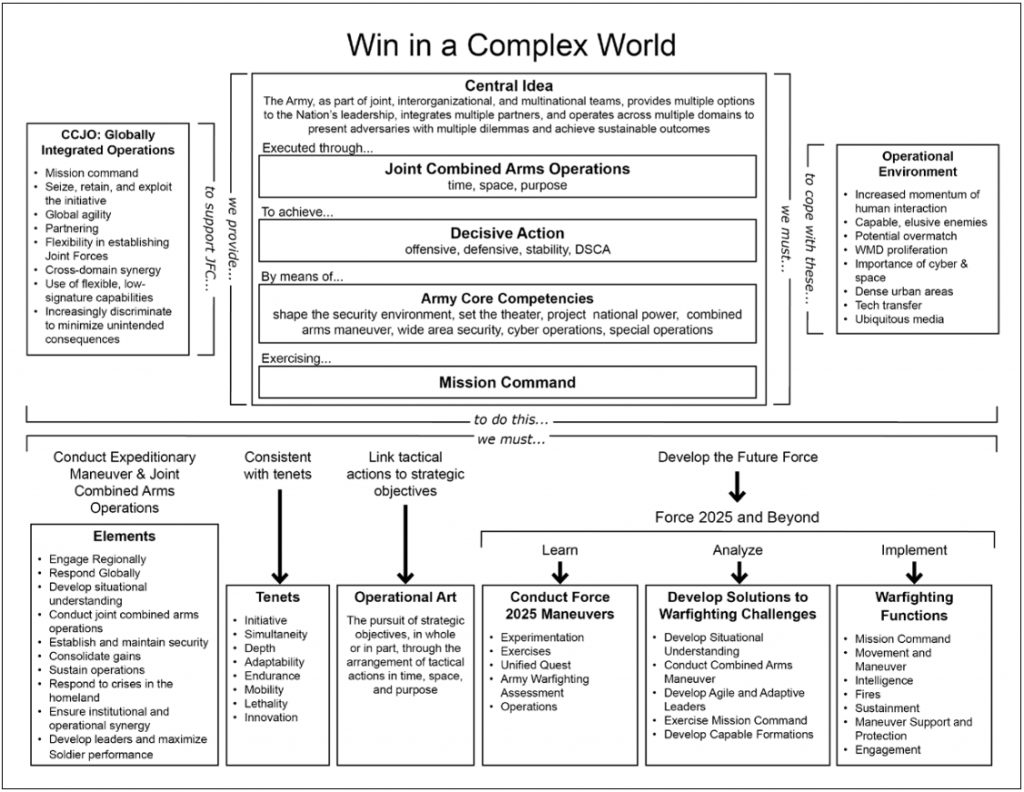