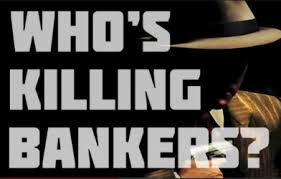 The causes of death given for some of the bankers seems quite odd to say the least including one banker shooting himself 8 times with a nail gun and another being crushed to death by their own SUV.

With the global financial system heading towards a major crash in the near future are these people buckling under the pressure of what they see coming or are they being silenced because of what they know?

We can only assume it’s a little of both.

Here’s the short list of top level bankers who have died recently:

May – Daniel Leaf – senior manager at the Bank of Scotland/Saracen Fund Managers, FELL OFF A CLIFF

Nick Bagnall – Director at Bank of Tokyo-Mitsubishi, son accidentally killed himself while trying to re-enact a Tudor hanging

Chris Latham – Bank of America, ON TRIAL, Murder for Hire

Hector Sants, Barclays – resigned due to stress and exhaustion, after being told he risked more serious consequences to his health if he continued to work – a remarkable turnaround as the Church reportedly approached him two months later and was told he had made a full recovery,

Keiran Toman, 39, former banker who believed he was being stalked by a reality TV crew starved to death in a hotel room, an inquest heard today.
An inquest was opened after his death in July 2010 but his family asked for a second hearing as they were not informed. Police found all of Mr Toman’s possessions in the room, but despite documents mentioning his family, failed to tell them he had died.

Nicholas Austin, 49, A former bank manager from Hersden died after drinking antifreeze in an effort to get high. was found in a coma by his wife Lynn at their home in Blackthorne Road on October 5. He died the same day.