The following report is part of a series produced by the TRADOC G-2 Intelligence Support Activity (TRISA). While the reports contain no control markings, they are not released publicly. 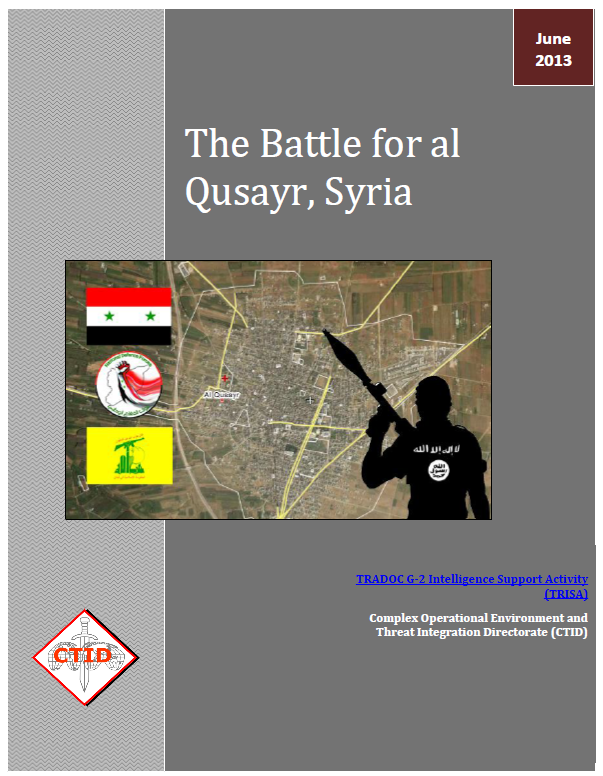 The al Qusayr area of operations is a critical logistics hub for the rebel forces fighting against the Syrian government known as the Free Syrian Army (FSA).

A number of external actors and international terror organizations have joined the fight in the al Assi basin on both sides of the conflict.

The al Assi basin and the city of al Qusayr can be considered critical terrain and key to the future outcome of the conflict in Syria.

Conventional and unconventional as well as irregular forces are all present in this area and are adapting tactics in order to achieve a decisive outcome for their cause.

Al Qusayr, a village in Syria’s Homs district, is a traditional transit point for personnel and goods traveling across the Lebanon/Syria border. Located in the southern half of the Orontes valley known as the al Assi basin, its proximity to northern Lebanon has made this region an important logistical area for the rebel forces of the Free Syrian Army (FSA) and the Syrian Arab Army (SAA), in what has become known as the Homs front. A typical border region, the al Assi basin’s inhabitants are multinational as well as multi-ethnic with a complex makeup of Sunni, Shia, Alawi, and Christian religions that claim both Lebanese and Syrian Citizenship. Due to the proximity to the border region, and the main north and south highway from Homs to Damascus, al Qusayr is a pivotal point in the Syrian conflict for both the FSA and the pro-regime SAA.

Weapons and materiel support from Lebanon to Syria moves via the Bekaa valley into al Qusayr. In order to maintain their lines of communication with Sunni sympathizers in Tripoli, Lebanon, the FSA uses a network of rural and urban inhabitants to act as couriers, scouts, and transporters to get supplies and weapons to the battle zones in Homs and Damascus and to transport wounded out of the combat zone. As the fighting continues in al Qusayr and the rest of the Homs district, Sunni families wait on the other side of the border in Lebanon to support the fight and to get news about their property. Islamic groups such as Fatah al Islam had been noted to be operating in al Qusayr providing expertise on explosives and other terror tactics.

Support in the area is by no means restricted to the Sunni insurgency and the FSA. The Shia population, which is thought to be mainly rural, as well as many Christians, tend to support the SAA and the regime, and may be providing intelligence on the FSA and sympathizers in the region. The highway from the large port town of Tartus to the Syrian capital of Damascus goes through Homs City and the al Assi basin, making it an important supply route for the Syrian government and government security forces. To control Homs is to effectively control the link from Damascus to the Mediterranean. Control of Homs City will hinder coordination between northern and southern Syria substantially. Activities in recent months by the terrorist organization Hezbollah indicate that the area is one of the main regions for foreign support to the al Assad regime. Shia families have also fled to nearby Lebanon and are waiting to see who will win the war before going back to claim their property. Due to the importance of the region, both sides have struggled to maintain control since the beginning of the Arab spring protests in 2011.

When anti-government protests turned violent, pro-government forces relied on force to control the situation. This escalation of the conflict provided the rebel forces both a justification for their actions and a cause for foreign fighters (mainly from Lebanon) to enter into the battle. As the threat intensified, the government was able to increase its activities in the name of self-defense, and the insurgency took root in Syria. Neither side had the experience or resources to take the conflict to a culmination without assistance from their respective benefactors. The al Assi basin, with its access to Lebanon, as well as its access to the Alleppo-Homs-Damascus corridor, became a key area of interest for both sides in the conflict. 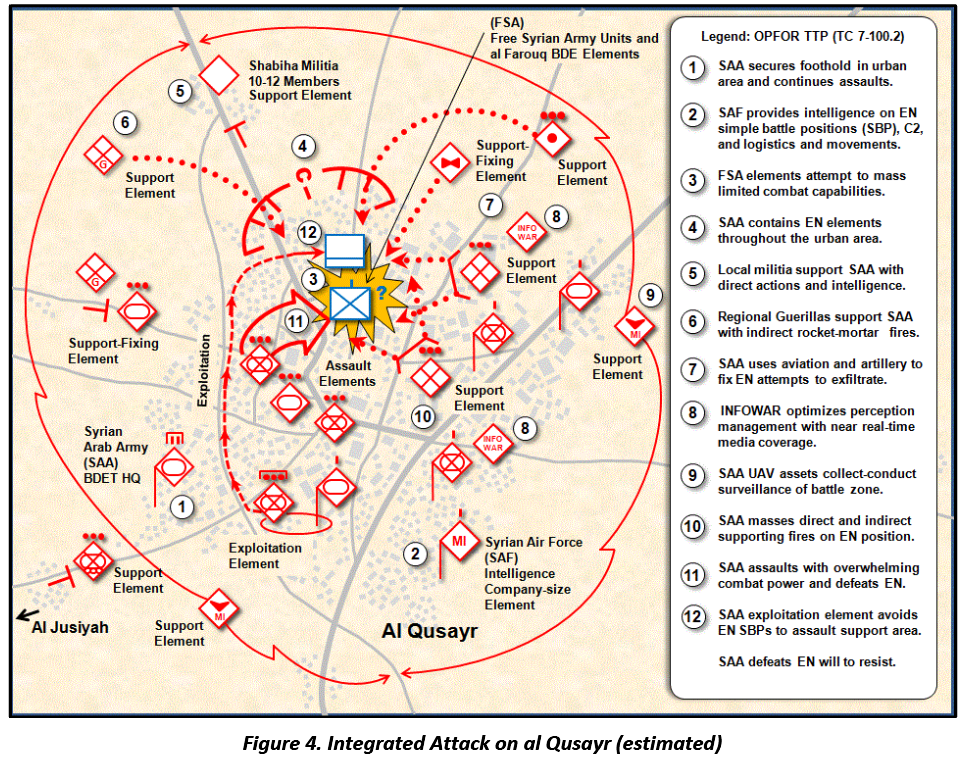 The following report is part of a series produced by the TRADOC G-2 Intelligence Support Activity (TRISA) Complex Operational Environment and Threat Integration Directorate (CTID).  While the reports contain no control markings, they are not released publicly. 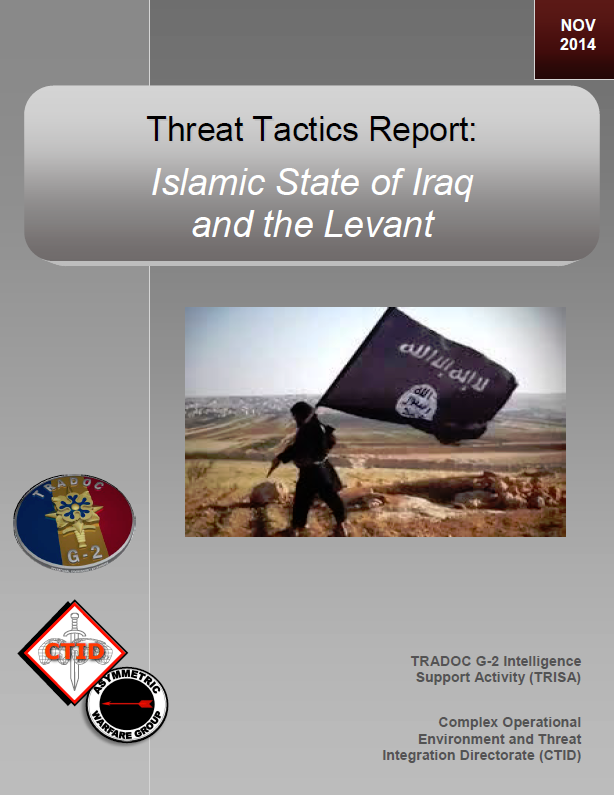 The Islamic State of Iraq and the Levant (ISIL) has risen to prominence as a danger to peace and a regional threat with global impact. This perception comes, in large measure, because of its successes in Syria and then a rapid takeover of northern Iraq. Its military victories are largely due to successful recruiting, intra-insurgent conflict, large cash reserves, and ineffective opponents. There is much to learn from how ISIL is fighting. The ready availability of recruits, many of whom are foreigners attracted to ISIL successes, and large amounts of money for payroll and purchasing war materiel are critical considerations, but it is also important to consider how ISIL is fighting on the ground.

This report is intended to identify key aspects of tactics and techniques used in ISIL’s actions in Iraq and Syria. ISIL, unlike its predecessors and competitors, is a paramilitary insurgency. While the baseline techniques being used by ISIL do not differ significantly from those it has employed since its early days as an al-Qaeda affiliate in Iraq, its capabilities have increased in scope and complexity. Techniques making use of suicide vehicle-borne IEDS (SVBIED) and vehicle-borne IEDs (VBIED) have become more sophisticated. ISIL’s use of information warfare (INFOWAR) has become more refined and pervasive with the adaptation of social media technology and increased technical competency among recruits. ISIL has targeted infrastructure such as dams, oil refineries, and power plants for use in population control and financing. ISIL has also demonstrated the ability to execute military tactics that require a level of competence and control uncommon in recent experience.

• ISIL is an evolution of an insurgent group that has changed its name to reflect an increasing geographic vision.
• ISIL’s advantage to date has been an increasingly large number of fighters and deep cash reserves to fund its operations. This provides greater capacity to organize, train, and equip like a military organization.
• ISIL executes military tactics to the best of its capability. This is a greater capability than that shown by previous insurgencies in the area, but still not best practice in a number of warfighting functions and key tasks.
• High value targets for ISIL have included such infrastructure as dams and oil refineries, which also contribute to its cash flow.
• Social media use has reached a new level of refinement as ISIL has capitalized on Western recruits’ language skills and a new generation of technically savvy apprentices.

Abu Bakr al Baghdadi, the ISIL-appointed caliph, governs through a bureaucratic organization that includes close advisors and specialty, regional, and local councils. Al Baghdadi requires a theologically-based pledge of loyalty and fealty. Until recent US airstrikes, ISIL had relatively unfettered movement capabilities along a corridor spanning northern Syria and Iraq. Command and control under these circumstances did not require the kinds of considerations now necessary with the US airstrikes targeting ISIL communication nodes. The use of couriers is likely to become an important part of communicating to ISIL’s network of fighters.
ISIL’s growth has come from its ability to coopt, dominate, or absorb competitor organizations. Some of these organizations may only be fair-weather friends and leave the coalition when the time is deemed right. There is a very real chance that ISIL leadership will lose control through splintering and infighting. With a varied and diverse demographic of foreign fighters, Sunni tribes, former Baathist leaders, etc., the challenge for ISIL will be controlling both the message and the fight.

A key element of ISIL’s command and control infrastructure is social media. During the attack on Mosul, for example, ISIL sent tens of thousands of tweets in a way that avoided the Twitter spam trigger. While social media companies are constantly identifying and deleting questionable accounts, it is easy to simply open a new account. A new, tech-savvy generation of jihadists opens up new means of communicating to vast audiences for recruiting, propaganda, and bureaucratic control.

ISIL’s anti-armor arsenal now contains a number of highly effective weapons that can be used against Iraqi and Syrian security forces. Anti-armor weapons with shape charges increase the likelihood of targeted armor vehicle crew casualties, but may not completely destroy the targeted vehicle during the engagement.15 However, due to Iraqi Security Forces’ (ISF) challenges in maintaining larger armored vehicles like the M1, it is possible this platform has been denied future use. The most common systems in use right now are the Kornet, the M79 Osa Rocket Launcher, and the ubiquitous rocket-propelled grenade launcher. In addition, ISIL has also captured a number of Russian and US tanks which, while more difficult to maintain and larger targets, can be used to attack enemy convoys.

Not surprisingly, these weapons are of choice use for the prosecution of offensive actions like assaults and ambushes. In July 2013, ISIL fighters ambushed an ISF convoy in the Khalidiyah area in Anbar Province. The convoy consisted of at least three M1A1 Abrams tanks and nine M113 armored personnel carriers. The attack occurred on a rural dirt road, initiated with IEDs and followed with anti-tank fire. The graphic below shows the missile hitting the tank. Even more recently, on 20 April 2014, ISF lost a formation with mixed armored vehicles including T-62 tanks. 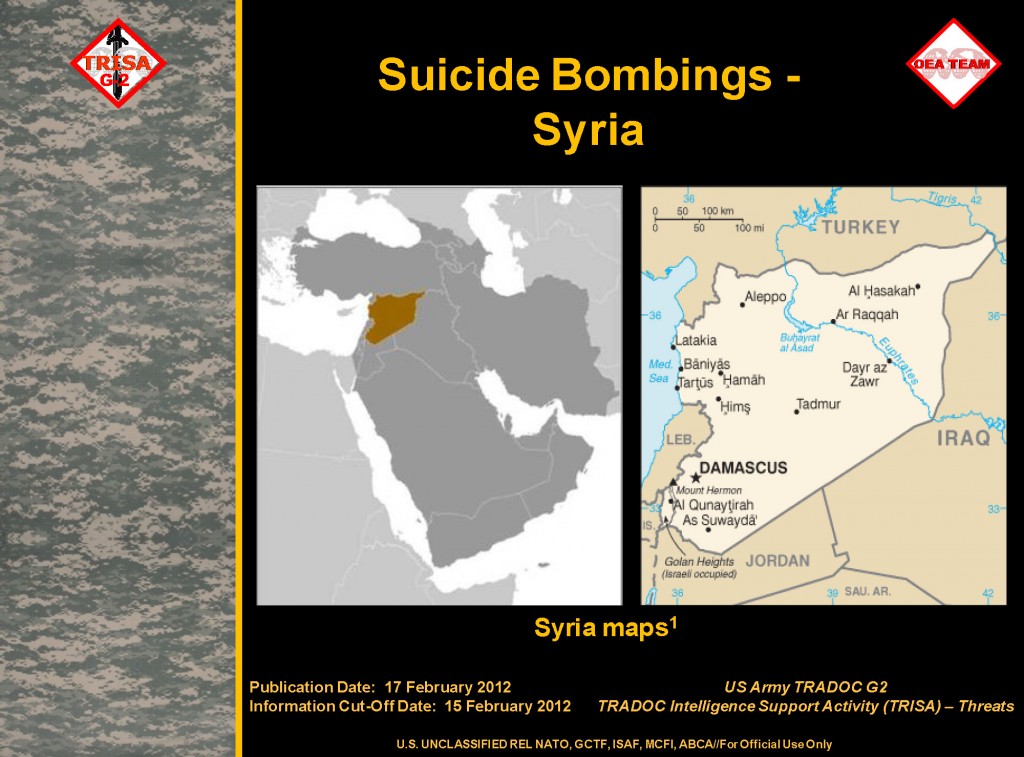 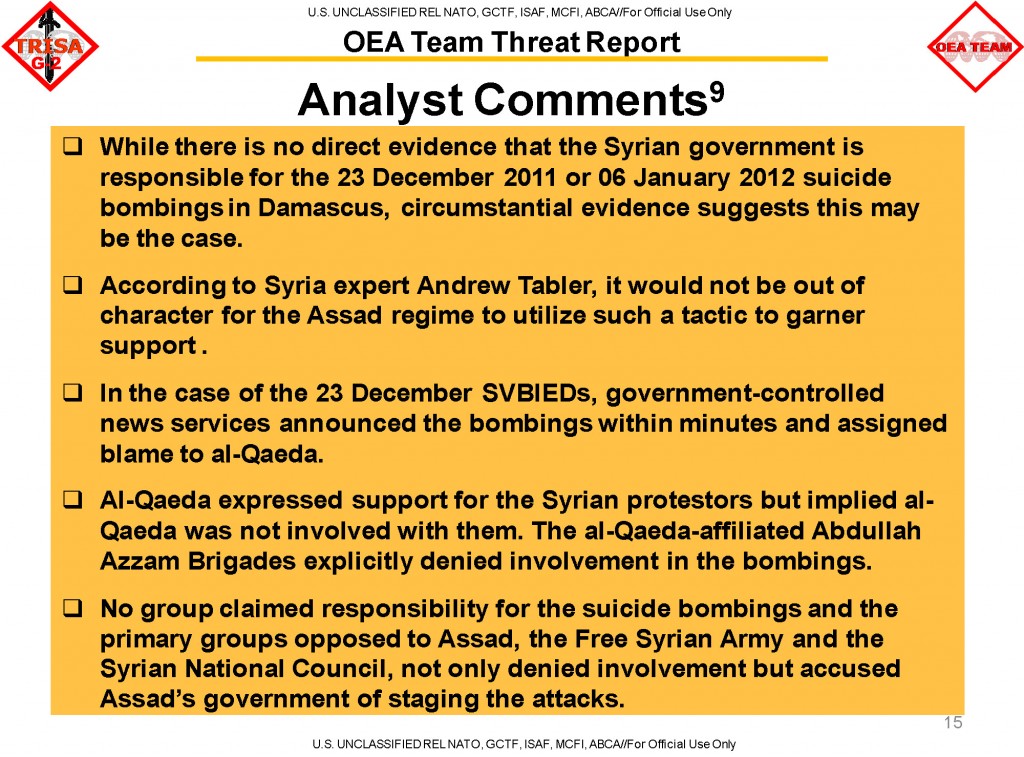 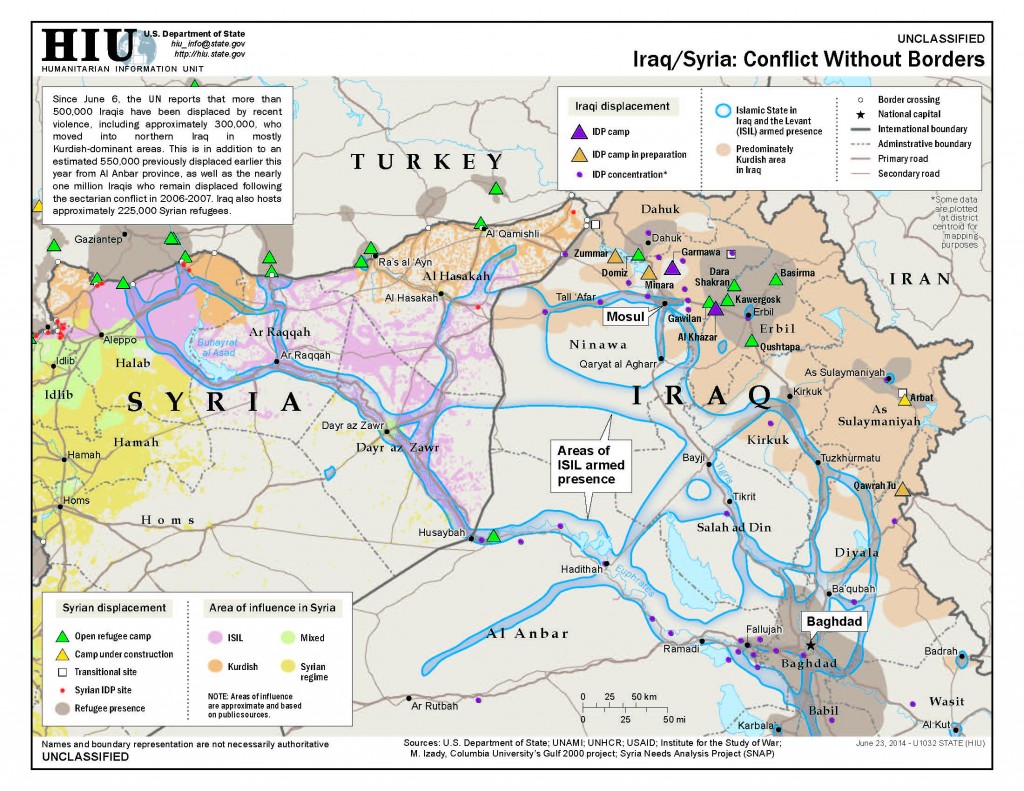