Bitter party of one? Elisabetta Canalis did NOT want her ex-lover George Clooney to take home Oscar gold last night … telling out photog she was rooting for another man … Quentin Tarantino. 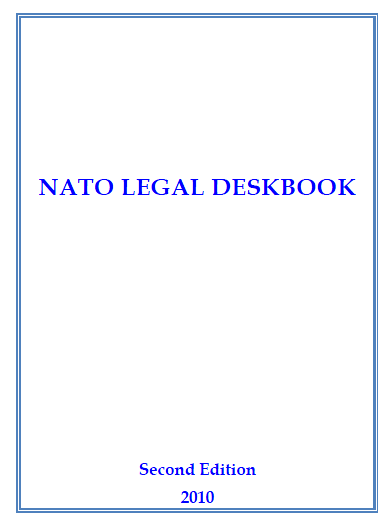 NATO leads efforts to bring stability in its ongoing missions in the Balkans, Afghanistan, and Iraq.

Legal Advisers serve as key members of a Commander‘s staff in the complex legal and political environment that NATO operates. The challenges NATO Commanders and legal adviser face to fulfil mandates, accomplish missions, and support the rule of law in embryonic and fragile democratic governments requires discussion, understanding and the documentation of practical solutions.

Why a NATO Legal Deskbook?

Two re-occurring themes surface in after-action reports from exercises and operations. The first is that NATO Commanders and staffs naturally and increasingly turn to the Legal Advisers to help plan, execute, coordinate, evaluate, and support the assigned mission. The second is that no single doctrinal resource exists in NATO to assist legal practitioners in the fulfilling of this task. Although several Alliance members have produced such guides, before the NATO Legal Deskbook none existed for Legal Advisers and legal personnel assigned to NATO commands.

Whether doctrinally ready or not, the Alliance calls upon NATO Legal Advisers and staffs to advise and, often, help direct the execution of the legal component of a mission or mandate. NATO owes these attorneys, paralegals, and legal personnel, who work under often austere and demanding conditions, practical guidance in the form of a comprehensive resource that provides an overview and insight on the legal regime that forms NATO practice. Fulfilling this need is the genesis, purpose and rational for this practitioner‘s guide.

What this Deskbook is not:

This Deskbook is not NATO policy or military doctrine for legal support to operations.

The Deskbook intends to reflect as closely as possible the policies and practice of NATO in legal matters, however, the Deskbook is not a formally approved NATO document and therefore shall not be deemed as reflection of the official opinion or position of NATO.

The practitioner‘s guide is not intended to offer guidance or advice to other military professionals involved in operations. It was written by Legal Advisers for Legal Advisers and legal staff. Its scope and purpose is limited to providing the military legal subject matter experts assistance in the accomplishment of the mission. While others may find the guide helpful, they should understand it is not a tutorial. Fundamental legal principles, standard practices of interpretation, and basic legal practices are assumed as matters already known by its intended audience: the Legal Adviser, legal assistant, or paralegal.

This practitioner‘s guide does not offer an all-inclusive formula on how to advise a NATO commander on any particular aspect of the law, nor is it intended to supplant national guidance. Instead, the guide pre-supposes that Legal Advisers will continue to find themselves providing legal support to operations and missions in a variety of different circumstances, environments, and locations. The guide and its contents must therefore be flexible and geographically universal in application.

Check out this photo of a sexy, hot celeb stepping out of a car so that all you can see is her cleavage. Can you guess who it is? You get one hint: It’s not Bette Midler.

The building in Shanghai that hosts the Chinese military’s Unit 61398, which has been accused of involvement in hacking attacks. Photograph: Peter Parks/AFP/Getty Images

The Chinese army has launched hundreds of cyber-attacks against western companies and defence groups from a nondescript office building in Shanghai, according to a report that warns hackers have stolen vast amounts of data from their targets.

Mandiant, a security company that has been investigating attacks against western organisations for over six years, said in a report (PDF)the attacks came from a 12-storey building belonging to the People’s Liberation Army (PLA) general staff’s department, also known as Unit 61398.

Mandiant said it believed a hacking network named the Comment Crew or the Shanghai Group was based inside the compound, in a rundown residential neighbourhood. Although the report fails directly to place the hackers inside the building, it argues there is no other logical reason why so many attacks have emanated from such a small area.

“It is time to acknowledge the threat is originating in China, and we wanted to do our part to arm and prepare security professionals to combat that threat effectively,” said the report.

The discovery will further raise the temperature in the intergovernmental cyberwars, which have heated up in recent years as the US, Israel, Iran, China and UK have all used computer subterfuge to undermine rival state or terrorist organisations. One security expert warned that companies in high-profile fields should assume they will be targeted and hacked, and build systems that will fence sensitive data off from each other.

Rik Ferguson, global vice-president of security research at the data security company Trend Micro, said: “We need to concentrate less on building castles and assuming they will be impervious, and more on building better dungeons so that when people get in they can’t get anything else.” .

Mandiant says Unit 61398 could house “hundreds or thousands” of people and has military-grade, high-speed fibre-optic connections from China Mobile, the world’s largest telecoms carrier. “The nature of Unit 61398’s work is considered by China to be a state secret; however, we believe it engages in harmful computer network operations,” Mandiant said in the report.

It said Unit 61398 had been operating since 2006, and was one of the most prolific hacking groups “in terms of quantity of information stolen”. This it estimated at hundreds of terabytes, enough for thousands of 3D designs and blueprints.

“APT1”, as Mandiant calls it, is only one of 20 groups Mandiant says has carried out scores of hacking attacks against businesses and organisations in the west, including companies that work in strategic industries such as US power and water infrastructure.

A typical attack would leave software that hid its presence from the user or administrator and silently siphon data to a remote server elsewhere on the internet at the instruction of a separate “command and control” (C&C) computer. By analysing the hidden software, the pattern of connections and links from the C&C server, the team at Mandiant said they were confident of the source of the threat.

A Chinese foreign ministry spokesman denied the government was behind the attacks, saying: “Hacking attacks are transnational and anonymous. Determining their origins is extremely difficult. We don’t know how the evidence in this so-called report can be tenable. Arbitrary criticism based on rudimentary data is irresponsible, unprofessional and not helpful in resolving the issue.”

But Ferguson told the Guardian: “This is a pretty compelling report, with evidence collected over a prolonged period of time. It points very strongly to marked Chinese involvement.”

Mandiant, based in Alexandria, Virginia, in the US, investigated the New York Times break-in, for which it suggested Chinese sources could be to blame.

President Barack Obama is already beefing up US security, introducing an executive order in his State of the Union speech this month that would let the government work with the private sector to fend off hacking. But it will take until February 2014 to have a final version ready for implementation.

The revelation comes days after the New York Times, Wall Street Journaland Washington Post, as well as the social networks Facebook and Twitter, said they had been subjected to “highly sophisticated” hacks that in some cases focused on correspondents writing about China and its government.

Separate investigations by the computer company Dell, working with the news company Bloomberg, tracked down another alleged hacker, Zhang Changhe, who has written a number of papers on PC hacking. Zhang works at the PLA’s “information engineering university” in Zhengzhou, Henan province, north-central China.

The allegations will raise the temperature in the continuing cyberwar between the west and China, which has been steadily rising since the Pentagon and MI6 uncovered Titan Rain, a scheme that tried to siphon data from the Pentagon and the House of Commons in 2006, and which one security expert said at the time dated back at least to 2004.

Ferguson suggested that western governments were also carrying out attacks against Chinese targets – “but that’s not a culture which would open up about being hit. I would be surprised and disappointed if most western nations don’t have a cybersecurity force.”

The Stuxnet virus, which hit Iran’s uranium reprocessing plant in 2010, is believed to have been written jointly by the US and Israel, while Iranian sources are believed to have hacked companies that issue email security certificates so that they can crack secure connections used by Iranian dissidents on Google’s Gmail system. China is also reckoned to have been behind the hacking of Google’s email servers in that country in late 2009, in an operation that files from WikiLeaks suggested was inspired by the Beijing government.

A timeline of government-sponsored hacking attacks

2005: “Titan Rain” pulls data from the Pentagon’s systems, and a specialist says of a December 2005 attack on the House of Commons computer system that “The degree of sophistication was extremely high. They were very clever programmers.”

2007: Estonia’s government and other internet services are knocked offline by a coordinated attack from more than a million computers around the world – reckoned to have been run from a group acting at the urging of the Russian government. Nobody is ever arrested over the attack.

2008: Russia’s government is suspected of carrying out a cyberattack to knock out government and other websites inside Georgia, with which it is fighting a border skirmish over the territory of Ossetia.

December 2009: Google’s email systems in China are hacked by a group which tries to identify and take over the accounts of Chinese dissidents. Google withdraws its search engine from the Chinese mainland in protest at the actions. Wikileaks cables suggest that the Chinese government was aware of the hacking.

2010: The Flame virus begins silently infecting computers in Iran. Itincorporates cutting-edge cryptography breakthroughs which would require world-class experts to write. That is then used to infect Windows PCs via the Windows Update mechanism which normally creates a cryptographically secure link to Microsoft. Instead, Flame puts software that watches every keystroke and frame on the PC. Analysts say that only a “wealthy” nation state could have written the virus, which breaks new ground in encryption.

The Stuxnet worm is discovered to have been affecting systems inside Iran’s uranium reprocessing establishment, passing from Windows PCs to the industrial systems which control centrifuges that separate out heavier uranium. The worm makes the centrifuges spin out of control, while suggesting on their control panel that they are operating normally – and so break them. Iran denies that the attack has affected its project. The US and Israel are later fingered as being behind the code.

September 2011: a new virus that silently captures data from transactions in Middle Eastern online banking is unleashed. The principal targets use Lebanese banks. It is not identified until August 2012, when Russian security company Kaspersky discovers the name “Gauss” embedded inside it. The company says the malware it is “nation state-sponsored” – probably by a western state seeking to trace transactions by specific targets.

2012: About 30,000 Windows PCs at Saudi Aramco, the world’s most valuable company, are rendered unusable after a virus called “Shamoon” wipes and corrupts data and the part of the hard drive needed to “bootstrap” the machine when it is turned on. In the US, Secretary of Defense Leon Panetta described Shamoon as “one of the most destructive viruses ever” and suggested it could be used to launch an attack as destructive as the 9/11 attacks of 2001.